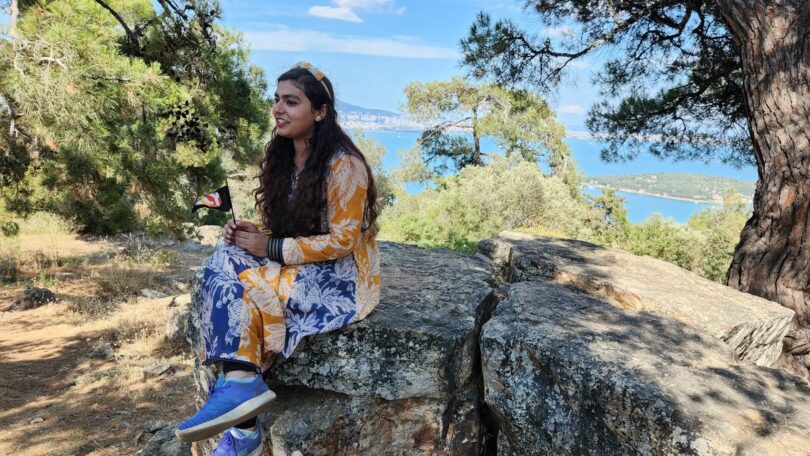 Büyükada, TÜRKIYE – Youth Journalism International alum Arooj Khalid of Lahore, Pakistan is one of only 25 young women featured in Dare to Learn: The Power of an Educated Girl, a new book published this summer by the Malala Fund.

The Malala Fund describes itself as an organization which “champions every girl’s right to 12 years of free, safe, quality education.”

The book is a collection of inspiring stories – presented as autobiographical chapters – of each of the young women about their fight to go to school. The 25 authors come from 13 different countries, and Khalid is one of only three from Pakistan.

The book includes a foreword by Malala Yousafzai, a Pakistani activist for girls’ education who was shot at age 15 in an assasination attempt by the Taliban.

Yousafzai survived the 2012 attack and went on to win the Nobel Peace Prize in 2014. Her work continues through the Malala Fund, benefiting other young women worldwide, including Khalid.

In addition to being included in the book, Khalid, 25, earned a fellowship with the Malala Fund, which gave her training about research, violence against women, psychological first aid and grant making.

Khalid took part in Youth Journalism International’s Global Conference in Istanbul in June as an Associate Editor, mentoring students and presenting about her life and work for girls’ education in Pakistan.

Twelve million girls in Pakistan are still out of school despite significant progress being made for girls’ education in the last decade, according to a Malala Fund report.

“Even (for) those who are allowed to go to school, their quality of education is so low,” Khalid explained.

“The unavailability of menstrual products and lack of awareness of menstruation” is a key factor contributing to the low numbers of girls in school in Pakistan, according to Khalid.

And the fact that “a lot of girls don’t have safe transport” means, she said, that “if a school is very far from a village or town, the boys still manage to get there, but the girls don’t because they can’t walk or go that far alone, as it isn’t safe for them.”

There are other practical issues keeping girls out of school, Khalid said.

“People don’t want to send their children to school if there are no female teachers”, she said.

Reflecting on her own childhood in Pakistan, Khalid recalled how, born to a family with two older brothers, she “always felt like there were things (she) had to do differently.”

This was when she first started to realize the differences in gender norms, especially when it comes to education.

After visiting schools in the United States, Khalid saw how teachers teach and how the curriculums in other countries worked, making her feel a “deep sense of deprivation.”

“Even though I went to really good schools, I felt like something really huge had been taken away from me,” she said.

Since her education, Khalid has been working to create a more gender-equal society – and a better education system for girls particularly, in Pakistan.

“I wanted to do something for the students as I felt something had been taken away from me and I felt I still had a better chance of gaining it, somehow,” she said, sharing her motivations behind her work for girls education.

After being “so fed up with the civil sector in Pakistan,” Kahlid and her friends started a welfare society while still studying at university. They partnered with an orphanage for homeless girls between the ages of 9 and 14 and began to run workshops with them about gender equality.

“In Pakistan, there was a survey done by the British Council and they found out that every single girl they surveyed thought that they had a lack of natural capacity to go into stem fields,” Khalid said.

She shared how she identified “little spots of that” in her own life, too.

So being the girls’ education champion that she is, Khalid started to work to change this through creating stories and posters that would allow girls to imagine themselves as scientists.

“The point of that wasn’t always to get girls to become scientists, but to promote critical thinking and get them to think about what’s happening in the world around them,” she added.

As a young teen, Khalid applied for and earned admission as a Youth Journalism International student, one of the first students from her country. She covered environmental issues, gender equality, health, terrorism, natural disasters, religion and culture.

At 14, Khalid wrote a compelling story about a 12-year-old girl who worked as a maid instead of going to school. The story won the organization’s top award for a news story in 2013.

“I would love it if every single child in Pakistan could get a free, good quality education but I think that is very utopian,” said Khalid.

But with trailblazers like Khalid paving the way, maybe that reality is not as impossible as it seems.

As Khalid said, “even though it sounds utopian right now, that is no reason not to work towards it.”

Holly Hostettler-Davies is a Senior Correspondent with Youth Journalism International. She wrote this story.

Mary Majerus-Collins is an Associate Editor with Youth Journalism International from the United States. She contributed a photo.