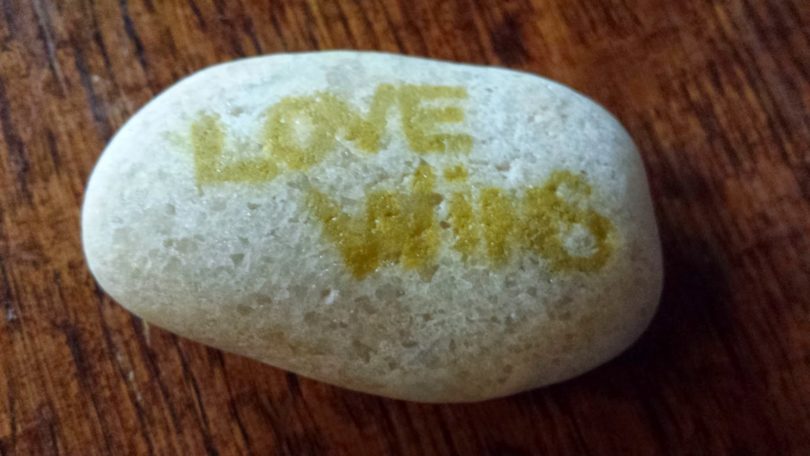 HARTFORD, Connecticut, U.S.A. – I met many inspiring people at the Peace in Connecticut conference Thursday, but one woman stood out.

Nelba Márquez-Greenelost her daughter Ana in the Sandy Hook Elementary School shooting in Newtown in 2012. In her grief, she founded The Ana Grace Project, which works to keeps Ana’s memory alive and spread the message, “Love Wins.”

I had the good fortune of making a special connection with her that I will always cherish. It started with a simple stone.

As the conference began, we were given rocks and told to write or draw a symbol of what peace means to us. Then, we were supposed to pair up with someone we didn’t know. I approached Mrs. Márquez-Greene and asked to be her partner.

I had drawn a dove on my rock in memory of my father, who passed away suddenly a year and a half ago from a heart attack. We were very close. He coached me to try to get me to socialize more. He took me to Disney on my birthday just because I asked. He did everything to help move me forward, but he also made sure not to spoil me.

The worst part about my dad’s sudden death was the fact that I didn’t realize how blessed I was to have him until, in an instant, he was gone.

My dad wasn’t on my mind when I showed up at the peace conference.

To be honest, I had no idea why I was there. I am not a seasoned reporter. I was unsure of what to expect and if I could even handle it.

But I told Mrs. Márquez-Greene about my father. She listened. My dad was the reason I went to church so often. I explained that a dove is brought to my church every Pentecost and that’s why I decided to draw a dove on my peace rock.

This woman who had been through so much still genuinely cared about my story. She has one of the kindest and most empathetic faces I have ever seen.

Mrs. Márquez-Greene told me that the slogan of her movement is “Love Wins.”

This phrase was what she decided to write on her rock.

When she spoke to me about what “Love Wins” meant to her, I was inspired. She told me that she would be willing to give me and my fellow young journalists time to talk to her privately. She showed patience with me, a teenager who had no idea what he was doing.

Before the conversation ended, we exchanged our peace rocks.

Soon after, it was time for her to give her presentation at the conference. That’s when she did something that touched me deeply. She not only displayed her true kindness, but also provided me with a moment that had an impact on me like very few moments ever will, and few ever had.

She held my rock – my gift to her – in front of the whole assembly and dedicated her presentation to me and my father.

I have only met a few truly inspiring people in my life, but I can honestly say that she is one of them. When Mrs. Márquez-Greene speaks, it is genuine, true and eloquent.

She changed me for the better.

Her influence comes from the fact that she does what she tells others to do.

My interaction with a perfect stranger was itself a message about empathy and kindness.I have never lost a child but I have lost someone close to me. It is a heart-wrenching experience that she handled with grace.

After the conference, I visited a playground in Hartford’s Elizabeth Park that was built in Ana’s memory.

Children talked and chased each other and slid on slides and ran all over. I talked to a little boy named Samuel through the telephone tubes. The playground was clean and well kept.

I know that Ana, like me, must smile as she sees this.

All of this reflecting made me want to go to the cemetery to visit my dad.

An hour later, I ran up to his headstone, something I very rarely do. Running up to a headstone excitedly, not frowning, is a rare occurrence. I reached into my pocket.

The rock was gone.

I was in deep disbelief. Where could it have gone? Panicked, I searched under the car seats. I moved the seats forward and back. I recruited my friend in the search. I had to find it.

Crushed, I walked back to my dad’s headstone. I was filled with disappointment as I told Dad my story but I made sure to let him know how much the experience had meant to me. I was really upset.

I told him about meeting with Mrs. Márquez-Greene and how I had been star struck. Even the rock she gave me was inspiring.

I felt so awful about losing it that all my plans to write about our encounter evaporated. I didn’t want to admit that I’d lost her precious gift. I had planned to bring it to college in the fall. Why had it come into my life only to disappear a few hours later?

I went home empty-handed and told my family about my day. As we talked, I realized that the rock might carry the “Love Wins” message to someone else. It might even help them.

I hope it means as much to them as it meant to me.

I still have the most important thing from that day – a special encounter with Mrs. Márquez-Greene. I hope I get to meet her again.

I dedicate this piece to Mrs. Nelba Márquez-Greene and her beautiful daughter Ana.

I hope that Ana is looking down at her mother today and sees how much her mom’s message meant to me. I like to think Ana is also looking down at the rock and whoever has it now, smiling.

Matthew Albrecht is a Junior Reporter for Youth Journalism International.