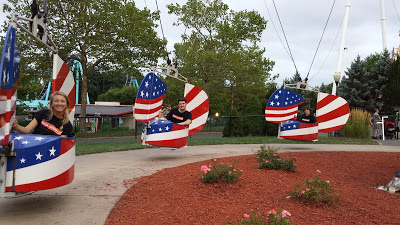 Ready to take off on the American Flyers at Lake Compounce are, from left, YJI reporters Shelby Saunders, Kiernan Majerus-Collins and Mary Majerus-Collins. (YJI)
BRISTOL, Connecticut, U.S.A. – The first time I rode a roller coaster, I broke my glasses.

I was on a trip to Lake Compounce, America’s oldest amusement park, with four fellow YJI students, all of whom were thrilled at the chance to ride the fastest, most exhilarating rides the park could offer.
“I live for the stomach flips,” one of them said.
But I didn’t share their enthusiasm. I had never ridden a roller coaster, and so stayed behind as they tried out Phobia, the park’s new coaster that claims to make riders face their fears. Watching from the ground, the ride seemed impossibly scary, but when they were done they all seemed to have loved it, and were eager to try out the next coaster.
“Come on,” said Mary, my sister. She claimed that Boulder Dash, one of two wooden coasters at Lake Compounce, would be more my speed. You don’t even have to go upside down, she said.

Reluctantly I agreed, and climbed into a little car that would shortly take me on my wild trip through the Connecticut woods. 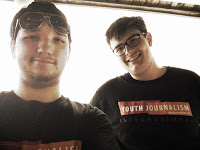 At the outset, the coaster moved slowly, climbing upwards. It didn’t seem so bad, but I told my fellow rider that I was nervous as we approached the top. I had no idea what was in store, however.

The coaster plummeted down, shaking violently, and never really stopped again. After the third or fourth drop, my face drenched with sweat from the heat, I could feel my glasses slipping down my nose. If they fell off on the coaster, in the best case scenario they would be lost forever in the forest. In the worst case scenario, they would be crushed to pieces.

I tried to reach up and grab them, but it was hard to do as I hurtled forward at speeds in excess of 60 mph. I eventually snatched them as they fell off my face, right before we went careening down a giant hill and around a bend to give riders a momentary view of the lake.
The coaster roared up and down as it sped back to the beginning of the track, and I stared down, just waiting for the ride to be over. 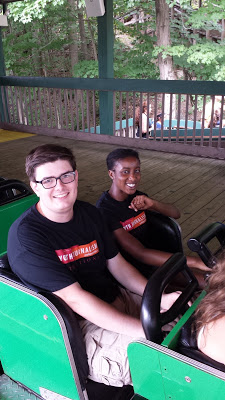 YJI reporters Kiernan Majerus-Collins and Ruth Onyirimba before riding the Boulder Dash wooden roller coaster at Lake Compounce. One of them liked it. (YJI)

Once I got my wish, however, I noticed that my glasses had broken apart. I resolved to henceforth take them off before going on any more rides, and to not ride any more roller coasters, at least that day.
The good news for me was that there’s plenty to do at Lake Compounce even for coaster cowards like me.
I rode the American Flyers, a World War-II era ride where you sit in a small compartment that hangs off the arm of a central post. It spins you around so it feels like you are gently flying and as you ride, you control the rudder, which means you can steer the compartment to some degree. I liked that ride a lot, and went on it three or four times.
I also liked the Wave Swinger, which were a bit more intense but still fun. And I liked the chance to ride the park’s old trolley and miniature train, which when taken in succession given riders a pleasant view of the lake and the park.
I had hoped to go on the Sky Ride, a gentle 30-minute glide on a ski lift up to the top of a ridge overlooking the park and then down again. I remembered riding it in elementary school, and the views were beautiful.
Aside from rides, Lake Compounce is filled with food and drink, which is helpful on a hot summer’s day. The park gives all visitors unlimited free water and soda (although the machines are surrounded by bees seeking spilled Pepsi), and has a few restaurants.
We ate at the Crocodile Café, where the best thing I had was the waffle fries, which I would definitely get again. The worst thing was a massive cupcake, which was an $8 disappointment. Don’t get it.
Instead, try the Old-Fashioned Ice Cream shop, where a milkshake made from hard ice cream is $5. The shop is air-conditioned (unlike the Crocodile Café), which was a relief after hours in the sun, and the chocolate milkshake I got was delicious.
Before the day was over I also got a chance to see the Caterpillar Train, one of my favorites rides from when I was a kid. I got a picture for old times’ sake.
We ended our day with the most charming ride of all – the 1911 carousel.
The traditional music and graceful wooden horses were enchanting, and as the final ride ended, I felt myself wishing we could stay just a little longer. Despite my broken glasses, sweaty clothes, and fear of roller coasters, Lake Compounce offered a fun-filled escape from the worries of everyday life. I look forward to my next visit.
Kiernan Majerus-Collins is a Senior Correspondent for Youth Journalism International. 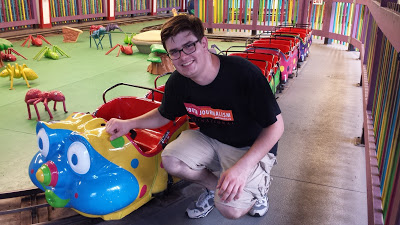 If you DO want thrills, read this: In search of stomach flips and plenty of speed: testing coasters at Lake Compounce, by YJI Junior Reporter Shelby Saunders

And don’t miss: “Please secure all loose items: a woman’s guide to dressing for success and thrills” by YJI reporters Shelby Saunders, Ruth Onyirimba and Mary Majerus-Collins.
***
The best thrill? Changing lives by supporting young
journalists through your support of YJI.
Your tax-deductible contributions take these students
on the ride of a lifetime. Thank you.
HelpYJI.org