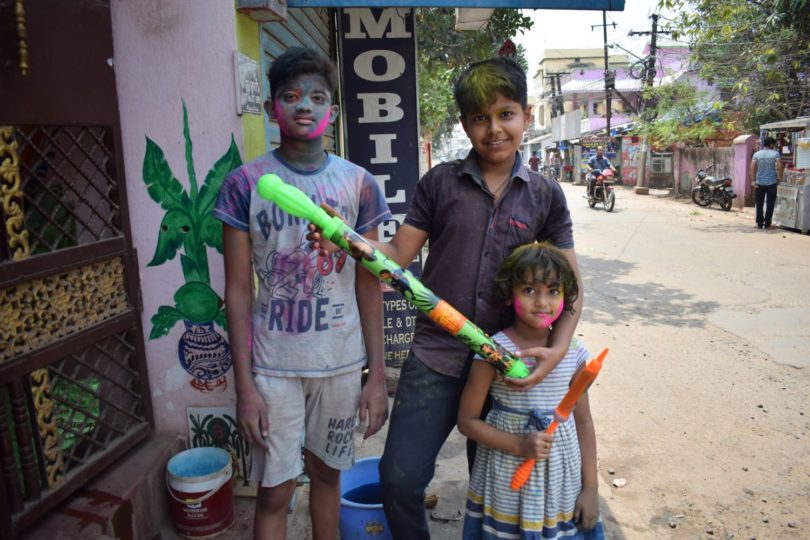 Kids celebrating Holi with each other. They are holding water guns, called Pichkari, filled with colored water to spray on others. (Purnima Priyadarsini/YJI)

Bhubaneswar, INDIA – The chants of “Bura na mano Holi hai” or “don’t mind it is Holi” reverberated in the air. The shouts and multiple shades of the colored powder called Gulal let us know the festival of color had finally arrived.

Hindus’ reasons to celebrate the festival of Holi is deeply rooted in the culture’s mythological tales.

Holi marks the day of good winning over evil and falls in the month of “Phalguna” as per the Hindu calendar.

Despite its origin from a particular religion, people of many faiths all across India and beyond its borders all celebrate Holi.

Holi is generally celebrated for two days. The day before the main festival, people light a bonfire and walk around it to celebrate the death of Monstress Holik from whom the name Holi is derived. The day, known as Choti Holi, or small Holi, commences the end of the devil.

Holi is a festival of hope. It commemorates the end of winter and the arrival of spring in India. Many people believe that the playful fun of Holi washes out all the diseases from a person and grants them good health for the future.

But a festivity that promises great ecstasy needs to be compromised when there is a pandemic outside the door.

This year, Holi came with India announcing 50,000 positive cases of covid-19. This was a cue for citizens to choose concern over celebration, a reminder that the threat still lingered.

But giving up Holi was a difficult choice for people who had already lost one Holi to the coronavirus lockdown last year.

The festival is a chance to create new memories. People – drenched from water balloon attacks from kids hiding in balconies and courtyards – find a relief in Holi’s colors.

The celebration addresses all the similarities that exist among humans and pauses the interruption of differences.

Last month, people took part in the festival around the city, just when the country entered into the second wave of the pandemic.

Trying to prevent more outbreak of disease, the governments of different Indian states declared restrictions on crowded Holi celebrations weeks before the festival. That led to people starting to play Holi days in advance to avoid police confrontation and thoroughly enjoy the festival.

But on the actual day, there was only a subtle presence of authorities to impose and maintain covid guidelines. Such shallow watchdogging resulted in people abandoning facemasks and openly roaming half wet on nearby streets.

People can get very excited about a festival that happens only once a year, especially when they get a chance to rub colors on their friends’ faces and get the satisfaction of making them look funny.

But celebrations this year could have been devastating for people because they risked a life-threatening virus. This deliberate refusal to take the pandemic’s effects into account is why India is one of the hardest hit nations in the second wave of the disease.

Purnima Priyadarsini is a Reporter with Youth Journalism International.