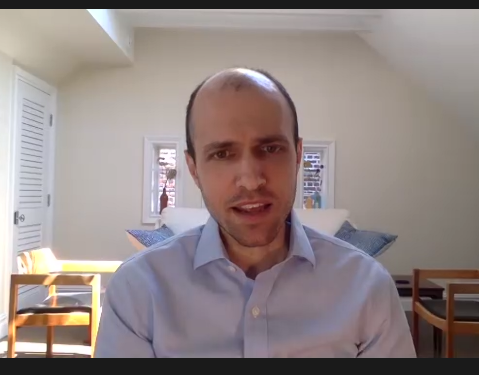 A. G. Sulzberger, chairman and publisher of The New York Times, speaks at the International Symposium for Online Journalism. (Screenshot)

ISTANBUL – Who knew I had so much in common with the publisher of The New York Times?

A.G. Sulzberger gave quite an interesting keynote speech at the 22nd International Symposium on Online Journalism Monday. I attended the online conference with peers from Youth Journalism International.

I found it quite baffling that I could relate to Sulzberger’s thoughts and opinions about the importance of journalism and how dangerous it can be.

I must admit that I went into the panel with a certain prejudice. This straight, white man with enormous wealth certainly could not and would not associate himself with people like myself.

He talked about how he views good journalism as the most valuable aspect of a news organization, and how it ultimately would lead to its success. I would have perhaps expected tips and tricks on playing the capitalist market in order to sell more material, even if the journalism would lose inherent value.

Sulzberger then touched upon the danger that doing good journalism might pose to reporters, in the United States, but especially in some other places in the world.

“Their work is much more dangerous,” he said of reporters working outside U.S. borders.

Sulzberger admitted that the previous American government’s open discrediting of journalism harmed not only the U.S. but the whole world.

Without naming the former U.S. president Donald Trump, Sulzberger said that those four years provided dictators with a “playbook” on how to slander journalists.

“That’s going to make the world … a more dangerous place,” said Sulzberger, who is also the chairman of The New York Times, one of the most powerful individuals in media.

Watching such a privileged person, conceivably a product of the American Dream, empathize and take accountability was a sight for sore eyes.