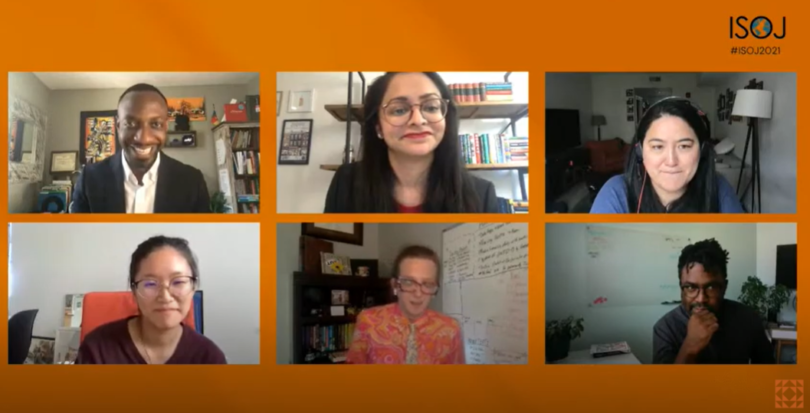 Panelists discuss turning the news into a conversation. (screenshot)

London, Ontario, CANADA – Getting the community to engage with news organizations builds stronger ties with readers, panelists told an audience of journalists Monday.

Members of media organizations who focus on readers and viewers spoke at the International Symposium for Online Journalism about turning the news into a conversation.

The year 2020 had “a lot of noise,” said Washington, with a global pandemic and accompanying political crisis. It was the perfect year, he said, to have audience engagement as a key strategy. News organizations that had already been making audience engagement a priority were there for their communities, said Washington, who is executive director of the Online News Association.

Annie Z. Yu, director of engagement at Politico, delivered a presentation on pulling back the curtain.

Yu said that two major components for engaging work are connecting a situation’s relevance to a reader’s life and having an authentic organization that feels humane.

In one instance, Yu said Politico wasplanning a follow up story about a complicated tech issue. They did a social media survey and discovered that half their readers were entirely unfamiliar with the original story. The result, according to Yu, was that Politico made more of an effort to explain the story and its context.

Audience engagement, said Yu, is “meeting audiences where they are, truly listening to them and actually allowing that to impact your journalism in some way.”

Nisha Chittal, the director of engagement at Vox media, talked about her organization’s coverage of the covid-19 pandemic.

Vox integrated questions submitted from their audience into story planning, according to Chittal.

Reporters covering covid deaths suggested surveying their audience to help shape stories about the pandemic’s impact, according to Chittal. The audience wanted to know how to talk with their kids, manage anxiety and make a reusable facemask, Chittal said.

Those questions from readers and viewers ended up making a difference in the coverage, Chittal said.

Ashley Alvarado, director of community engagement at Southern California Public Radio, said her organization is trying to listen more to its audience and work towards understanding.

They did it to redesign their early childhood coverage, Alvarado said, and are planning to use the same kinds of methods in covering the 2020 Census.

Alvarado talked about another approach she called feeding the conversation, where the organization would create an opportunity for journalists to stop their usual quest for a soundbite or a specific line of questioning to do “deep listening” to audience members.

Bobby Blanchard, assistant director for the audience at The Texas Tribune shared a story about how they launched a new texting service during the fatal February winter storm. The texting service provided citizens with news and information and also allowed them to interact and ask questions regarding the situation.

Darryl Holliday, news lab director and co-founder of City Bureau, spoke about what he called democratized journalism, which he said turnsnews into clicks of action.

Chuying Huo is a Senior Reporter with Youth Journalism International.