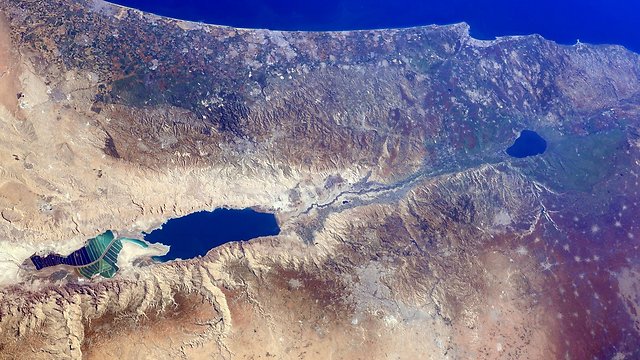 Israel (NASA)
NETANYA, Israel – Fifteen seconds. When you hear the sirens, you will have 15 seconds to find shelter. In this reality, the children of the Israeli south live in constant fear from one alarm to another.
Everybody hide, everybody run.

My name is Roei Ashkenazi. I am an Israeli, a Jew and a seed of peace.
In 2012 I was accepted to the Seeds of Peace program. It’s a camp that brings together kids from Israel, Palestine, Jordan, the United States and more, in the amazing state of Maine, in the northeastern part of America.
I’ve always known the suffering the Jews have endured. I knew the Israeli pain and how hard is it to live here. I knew about the missiles and that there were enemies who just wished to see me and my country burn to ashes, but I did not know who the enemy was.
I came to learn, thirsty and hungry.
In that camp I came upon an 18-year-old boy with a charming smile and innocent eyes who had seen pain that no child should see.
Young Ahmad, a veteran of Gaza and a proud Palestinian, hoarded pain in his very large heart.
After two weeks of what I can now say was the best experience of my life, the goodbyes from everyone were hard to bear. I came back to the Israeli heat and carried on with my life – confused, yet much wiser.
Time went by and here again comes the escalation in the south, with missile attacks on Israel. This was not news to me, but the range grew bigger and bigger and soon even I, along with others living in the convenient center of the country, became paralyzed by the sound of the alarm.
Neither the fear nor the escalation was new to me, but then the Israeli reaction began in Gaza, operation Pillar of Defense in Ahmad’s town. That’s when I realized that no war, no operation, would ever be the same.

Have you ever wondered what it’s like to see, yet be unseen?

Today most of our information comes from our social media networks like  Facebook and Instagram. So as a seed of peace, every social network of mine includes a variety of Egyptians, Jordanians and Palestinians, and I see everything.
I see the nationalistic pride, the hatred and the fear. Who can tell which side of this war I’m talking about?
The two sides are so alike. We all suffer. We all live under a reign of terror ruled by one terrorist: the war.
I see everything. I hear it all but I stay silent. Who am I to speak in front of such a failure of creation, in front of so much pain and this bloody war?
I see everything.
In the midst of Operation Strong Cliff in Gaza, Hamas is shooting missiles and the Israeli Defense Force is shooting back and the TV keeps on airing it all.
The cry of the Jewish mother does not sound much different than the cry of the Arab one. The accent is different and there is another god to curse, but the sound is the same. One might scream and one might hit, but the sound? The same.
My heart goes out to them all – to the 18-year-old flowers who sacrificed their lives to defend their homes and families, to the parents and the innocent ones who lost their homes and lives – but I know there is no choice, and I know who deserves the blame.
Hamas, which in Arabic stands for “Islamic resistance movement,” is considered a terrorist organization by Israel, the United States, Japan and the European Union. It’s banned in some Arab countries, including Jordan and Egypt.
Hamas is the dominant organization in the Gaza strip and is, above all, the organization responsible for the suffering there. Hamas and its troops put all its efforts and resources not in developing Gaza or Palestine, not in supporting peace and not even to liberating Palestine, but only toward the complete destruction of Israel.
This latest Israeli operation in Gaza began when three Jewish boys were kidnapped and slaughtered. People blamed Hamas, which of course created an Israeli response. Instead of trying to put out this fire, Hamas began a massive missile attack towards all of Israel.
Israel, of course, had to response and a ground operation began. Until then I knew how Hamas hurt me, but I had no idea how much Hamas hurts the people of Gaza. Throughout this operation, the Israeli military attacked but, like always, tried to ensure that civilians were hurt the least.
They used intelligence and made announcements in advance of bombing, but reports that Hamas used mosques, hospitals and schools as bases and missile launching sites make it seem difficult not to hurt civilians.
How can the world stay quiet in the face of such abuse, when civilians are used as human shields?
Imagine a situation where your country – your homes and hospitals – was constantly under missile fire. Imagine a city underneath your legs: tunnels that come from the enemy base and into your land, into civilian land. At best, the tunnels are used to smuggle weapons, though they mostly create a way to slaughter more Jewish citizens. This is how Hamas hurts me.
But imagine a situation where your government doesn’t build shelters or alarms to help you during times of war, a government that puts all of its efforts, money and resources into war, missiles and tunnels. This is how Hamas hurts its people.
Just imagine if all the money used to build those tunnels had been used instead for shelters and hospitals.
Former Israeli Prime Minister Golda Meir famously said, “We can forgive the Arabs for killing our children. We cannot forgive them for forcing us to kill their children.”
Children are dying. This war has seen too much blood. Me and Ahmad are here to tell our stories, but many of us are not here anymore.
To them we owe peace.
Roei Ashkenazi is a Junior Reporter for Youth Journalism International.

“Tears flow in Gaza, but of happiness over cease-fire agreement,” by YJI reporter Dalia Al-Najjar.