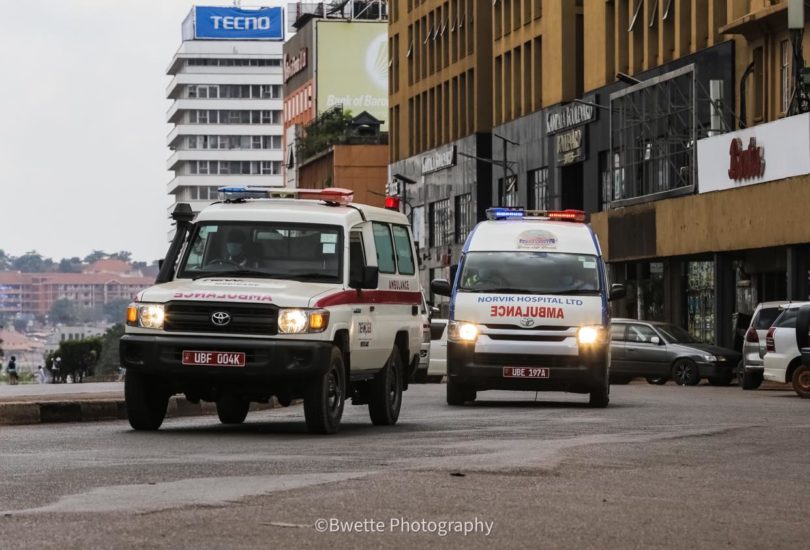 Ambulances rush the injured to hospitals after Tuesday's bombings in Kampala. (Photo by Gilbert Daniel Bwette for YJI. Used with permission.)

The first attack occurred near the city’s police headquarters checkpoint about 10 a.m., said police spokesperson Fred Enanga. He said that blast targeted the police and affected mostly the police officers.

In a blink of an eye, the second blast took place. A few minutes after the explosion near the police headquarters, a second explosion took place near the national Parliament building.

Because of suspicion that the bombers were targeting Parliament, officials immediately suspended Tuesday’s Parliamentary sitting.

The police confirmed three people died on spot and one person succumbed to injuries a few hours later, raising the number of those dead to four. In addition, three suicide bombers died instantly after detonating the bombs, bringing the total death toll to seven.

The deadly explosions came 22 days after a bomb attack on a Swift Safari bus which left one person dead and dozens striving for life.

The Ugandan police spokesman said that the attacks were planned by Allied Democratic Forces, a rebel group operating in East Democratic Republic of Congo.

The group, formed in the 1990s with an aim of overthrowing the Uganda’s long-serving President H.E. Yoweri Tibuhaburwa Museveni – has killed thousands in the Democratic Republic of Congo and has since made several attacks in Uganda, to the dismay of the local population.

Though the police stressed that the Allied Democratic Forces is behind these deadly killings, the Islamic State has come to claim responsibility for the bombings through a message sent on their telegram account.

Museveni criticized the act and asked Ugandans to remain calm and vigilant.

“They have exposed themselves when we are more ready for urban terrorism,” Museveni said in a statement to the nation hours after the attack. “They will perish. Rural terrorism was defeated in 2007 in the Semliki National Park.”

Many terrified residents of Kampala were seen leaving the city because it is alleged that these merciless rebels are still planning more attacks in the country.

“It clearly shows that the ADF-linked radicalized groups still have a desire to carry out lethal attacks on soft targets using suicide attackers and improvised explosive devices,” Enanga said.

Enanga added that for now, the bomb threats are still active, and cannot be solved in one go. That calls for the popular intelligence and vigilance of the community, he said.

Derick Mwanguhya is a Junior Reporter with Youth Journalism International. He reported and wrote this story.

Gilbert Daniel Bwette is an Associate Editor with Youth Journalism International. He contributed the photo.

Derick Mwanguhya is a Junior Reporter with Youth Journalism International from Kampala, Uganda.