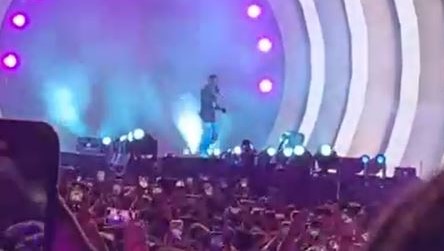 As captured in a screen shot from video by Zander Alt, Travis Scott ends his Astroworld concert in Houston.

Houston, Texas, U.S.A. – As tens of thousands streamed through the metal gates for rapper Travis Scott’s Astroworld concert this month, the atmosphere was electric with anticipation for one of Houston’s biggest music events.

But within hours, the excitement had been replaced by flashing lights and hordes of medical personnel on the scene for what the Houston Fire Department called a mass casualty event.

A crowd surge in front of the stage killed 10 fans and injured hundreds of others.

Zander Alt, a high school senior who attended the concert, stood at the front of the middle section, right behind where most of the casualties occurred near the stage during the popular rapper’s set.

“I noticed something was wrong, when there was one guy behind me, and two medics were dragging him out by his arms, and his neck was, like, rolled all the way back, and his eyes were in the back of his head,” Alt said.

He said he had a friend up closer who told him that at the height of the crush he “was standing on someone for a whole song” because “he didn’t have a choice, like he couldn’t move anywhere.”

Though the Houston Fire Department declared an emergency, the concert continued for another half an hour despite concertgoers pleading with officials to stop the show, with some trying to climb onto the stage to get Scott’s attention.

Alt said that even once people realized something had gone wrong, they couldn’t do much to get away.

Because each section of Houston’s NRG Park was surrounded with metal barricades, “once you got in, you couldn’t get out,” Alt said. They also made it hard for people caught in the surge to move out of the way.

Though Scott’s annual concert had become a point of pride in Houston, Alt said, “Honestly, I don’t think there’s gonna be an Astroworld again.”

Scott may be in trouble, too.

The tragedy “will definitely tarnish his reputation,” Alt said. “A lot of people feel like he shouldn’t even be allowed to make music anymore, people are saying not to play his music on Spotify, he doesn’t deserve it.”