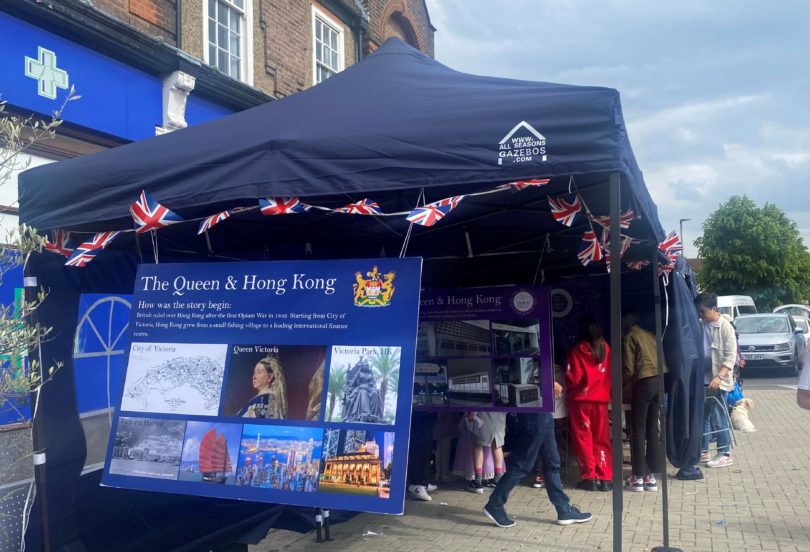 A stall in Mill Hill called ‘The Queen and Hong Kong.’ (Anjola Fashawe/YJI)

LONDON – Queen Elizabeth’s Platinum Jubilee began June 2, celebrating her 70 years of reign in the UK and the Commonwealth countries.

Celebrations for the Jubilee took place all over the UK officially on June 4th.

Flags and pictures were plastered around parts of London and temporary stalls added to the festivities.

In Mill Hill, a stall titled ‘The Queen and Hong Kong’ had both adults and children from Hong Kong offering Chinese calligraphy to the public as well as insight into the country’s history with the UK.

Diana Ross, Lin-Manuel Miranda and Sir Elton John all performed at the Jubilee.

Prince Harry and the Duchess of Sussex, Meghan Markle, also made an appearance at a Friday thanksgiving service.

For some Britons, this is seen as a jubilant holiday but for others, the Queen’s Jubilee disregards the damaging impacts of the UK in Commonwealth countries, which are former territories of the British Empire.

On her TikTok feed, Shola Mos-Shogbamimu – an activist, attorney, author and British political commentator – posted part of a talk show appearance where she called the Jubilee the “embodiment of the British Empire which refuses to apologize, reconcile and pay the price for its actions.”

Although the Queen’s Jubilee served as a weekend which allowed the nation to celebrate each other’s cultural diversity and the Queen’s impact, arguably there is still a long way to go before Commonwealth countries can truly celebrate the Jubilee along with the UK.

Anjola Fashawe is a Junior Reporter with Youth Journalism International.

Anjola Fashawe is a Junior Reporter with Youth Journalism International from London, UK.