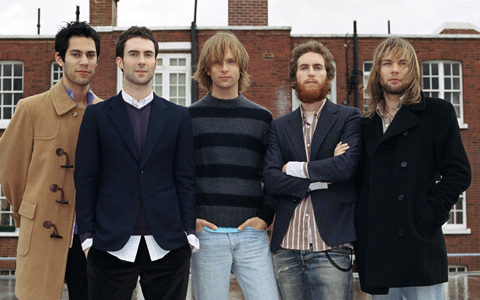 AMHERST, Massachusetts, U.S.A. — Some bands can blow you away by putting on an unforgettable live show. Maroon 5 is definitely one of them.

When the Honda Civic Tour made its way to the Mullins Center at the University of Massachusetts at Amherst recently, fans of all ages snapped pictures of the Maroon 5 tour bus in the parking lot.

Inside the hall, the audience’s yells were deafening as Maroon 5 entered the stage and opened with its chart-topping hit single, “Harder to Breathe.”

Maroon 5 continued to sing as fans sung along — and screamed.

Lead singer Adam Levine even mentioned that Amherst had the loudest crowd so far on the tour.

The crowd whistled ever louder after Levine threw his black button-down shirt onto the stage, revealing a white t-shirt and jeans. He threw towels and guitar picks into the audience throughout the performance.

The high-intensity performance concluded with “The Sweetest Goodbye” and the band’s hit single “She Will be Loved.”

During the encore, the band did a rendition of “Highway to Hell,” sung by drummer Ryan Dusick, which rivaled the original.

Buying a ticket to a Maroon 5 concert guarantees you an amazing live performance with vibrant, light, catchy songs with original vocals and band members who are multi-talented on stage.

The opening act, The Donnas, put on an energetic set.

Between sets, the all-girl rock group signed numerous autographs and posed for pictures until the lights grew dim before Maroon 5 hit the stage.

The Honda Civic Tour dates are all available online at Maroon 5’s website, www.maroon5.com. Tickets can be ordered online through Ticketmaster.