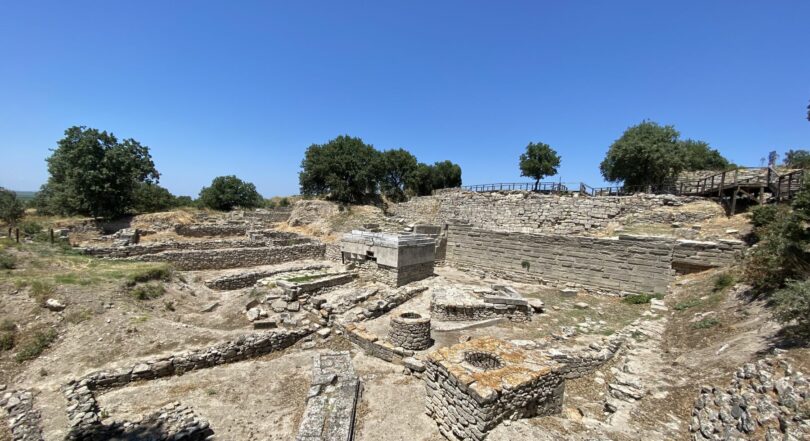 Çanakkale, TÜRKIYE – Situated along the Dardanelles Strait, the historic city of Çanakkale has hosted many civilizations from the Lydians to the Persians and the Ottomans.

We visited the city after Youth Journalism International’s Global Conference concluded in Istanbul, with the main objective of seeing the ancient site of Troy.

The legend of Troy goes that the Greeks, at war with the Trojans, used a wooden horse disguised as a gift, to sneak soldiers into the city. They then proceeded to win the war.

But this geography holds an incredibly important part in recent Turkish history as it did in ancient Greece.

It’s home to Gallipoli, one of the many World War One battle sites where the Ottoman Empire carried out its last war efforts.

Mustafa Kemal Atatürk, who would go on to found the Turkish Republic, rose to his military fame here.

The importance of Gallipoli is its location. The allied powers needed to reach the Ottoman Empire’s capital – Istanbul – and they could only enter through the Sea of Marmara, which could only be accessed by the Dardanelles Strait.

The Ottomans knew that Gallipoli would be their last stand against the enemy. They set a defensive front. This ended up being the only Ottoman battle front that emerged victorious in all of WWI – through tremendous effort, that is.

Gallipoli is said to have six bodies and 6,000 bullets per square meter of soil. After the war, some high schools were known to not have any graduating classes as all their students were martyred.

So, while Türkiye is home to many ancient civilizations and mythology, we must also acknowledge its current state and recent history as we visit these tourist sites.

This poem “To a Traveller”  by Necmettin Halil Onan is dedicated to travelers passing through Çanakkale.

Part of the poem is displayed in a memorial on a hillside along Gallipoli.

The poem, and the memorial, are reminders to travelers of the gravity held by the land where they so nonchalantly step.

The poem is translated to English by S. Tanvir Wasti on the Turkish website www.canakkale.gen.tr.

Stop wayfarer! Unbeknownst to you this ground

You come and tread on, is where an epoch lies;

Bend down and lend your ear, for this silent mound

Is the place where the heart of a nation sighs.

The memorial in Çanakkale with the first stanza of the poem. (Bilge Güven/YJI)