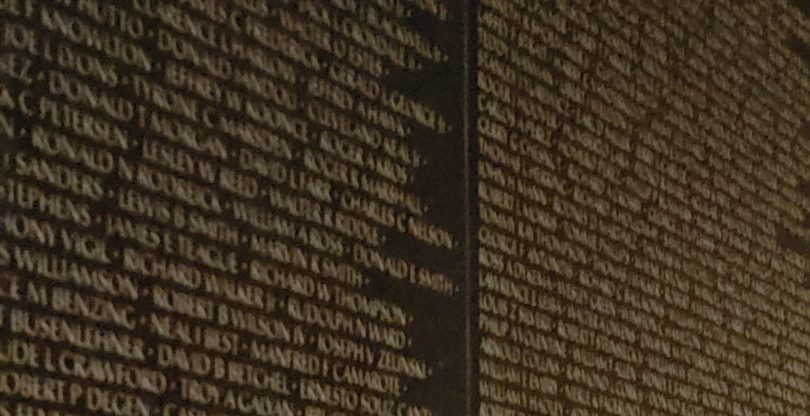 BRISTOL — A generous contribution from a Bristol couple may enable a permanent memorial to be built in remembrance of the Vietnam Moving Wall that visited the city last month.

The city’s Board of Park Commissioners discussed a preliminary plan Wednesday for a memorial area to be set up on the location where the Moving Wall stood along Memorial Boulevard.

The focal point of the proposed memorial, a black granite stone, was offered to the city free of charge by Shawn and Lucy Casey of the Casey Monument Company.

“The experience of the wall was emotional and moving,” Shawn Casey said.

It was a second trip to the Moving Wall that prompted the Caseys to entertain the thought of donating the stone to the city.

Jack VandenHeuvel, a Korean War veteran, presented the board with a rough outline of what he would like to see happen with the stone.

The engraving, he said, could be modeled after a T-shirt he wore with the names of the 17 dead Bristol veterans shown as a rubbing from the Vietnam Memorial Wall. Beneath the names was the phrase, “Heroes In Black Stone,” along with the city’s name and the dates that the Moving Wall was in Bristol.

Although the idea was accepted, official plans were not. Mayor Frank Nicastro, the board chairman, was reluctant to have a vote on the issue because three of the seven commissioners were absent for the meeting.

“I’d like to see (plans) in black and white,” Nicastro said.

Nicastro asked that a final sketch be presented to the board. He added that he would like for there to be one plan and for it to be done right.

“This is our ‘thank you’ to the Wall,” Nicastro said.

A final plan should be presented to the board at its next meeting. Nicastro said he was willing to call a special park board meeting if the proposal could be handed in early.

The hope by some is to have the stone set in place by Veteran’s Day in November.