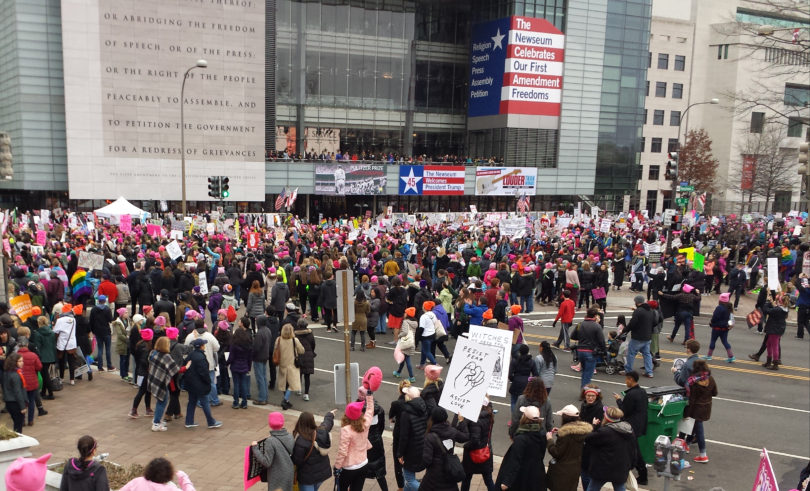 Americans gathered in protest in front of the Newseum in Washington, D.C. last year. (YJI photo)

Cary, North Carolina, U.S.A. – America has always grappled with its history of discriminatory policies; from slavery and segregation to the Chinese Exclusion Act to Japanese internment camps. We haven’t been able to escape our dark past, but we must strive to change our future.

The travel ban is Trump coming through on his campaign promise of a “total and complete shutdown of Muslims entering the United States.”

The 45th president’s legacy is one of racism and xenophobia. The Trump administration’s negative rhetoric towards Muslims has been evident since the 2016 campaign, and the travel ban cements Islamophobia as a defining policy.

The ban is pushing our nation back into the gauntlet of legislated bigotry when we should be aiming to become more inclusive and accepting.

Fear not, for we can unite.

After Trump signed the first version of the travel ban in January, Americans across the country stood in solidarity with those affected.

From Seattle to Orlando, Americans protested the ban, pledging their support to those who were detained or otherwise unable to enter the United States.

Though the travel ban may be Constitutional, so is the right to petition, to assemble, to speak our minds.

We can prove that America is defined not by the mistakes of our past, but by our willingness to right our wrongs and change our future for the better. America is not the actions of one man, one Congress, or one Supreme Court.

America is its people. And its people will not stand for injustice.

Vinithra Sudhakar is a Junior Reporter for Youth Journalism International.