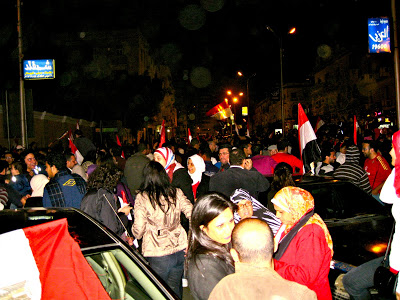 By Lama Tawakkol
Junior Reporter
Youth Journalism International
CAIRO, Egypt – By all standards, February 11, 2011 was glorious.
The air was cool, it was slightly windy and the sun was mostly shining – the kind of weather I like.
But that day was so much more.
It was the day we learned that President Hosni Mubarak was abdicating his position and leaving the country in the hands of the trustworthy Armed Forces High Council.
We had not dared hope before that it could happen, but at 6 p.m. that day, he was suddenly the EX-president!
The moment Vice President Omar Suleiman finished his statement, people were in their balconies cheering, shouting “Allahu Akbar,” meaning “God is Great” in Arabic, and yelling congratulations at neighbors and passersby.
The streets were packed in no time with men, women and children of all ages and shapes conveying their joy over the news.
For 17 days, the people demanded Mubarak’s resignation and it was finally there. It gave Egyptians a sense of unprecedented freedom and an aura of victory.
That night, Tahrir Square was the place to be – if you could reach it amidst the crowds who were cramming the streets.
Those who couldn’t get there headed to famous gathering spots across the country where the scene was always the same. Happy voices loudly sang the national anthem and other patriotic songs while the younger people set off fireworks in celebration.
National colors of red, white and black were everywhere, from the flags the people were holding to the clothes they wore.
Chants filled the air: “Raise your head up high, you’re Egyptian,” “Egypt is free, Mubarak is out,” and “The people have overthrown the regime.”
In this atmosphere of pride and hope, people regained confidence that Egypt was their country and they would rebuild it and restore its glory. Those who were celebrating also raised pictures of the martyrs killed during the revolution and collectively prayed for them in loud voices.
No street in Egypt was empty that night as people celebrated, celebrated and then celebrated some more.
It was not over, they knew, but it was a start and a pretty good one.
The military had stood by their side and would continue to do so. People trusted them, so they posed for pictures with the soldiers on the street, and repeatedly recited that the “army and the people were one hand.”
Ten days have passed since that historic day the whole world will forever remember, and a lot of progress has been made since.
Young Egyptians have organized multitudinous campaigns to clean the streets and frankly, they’ve never been cleaner. They’ve handed out flyers, put up posters and sent text messages asking that people be more positive now and stop littering, breaking traffic laws or giving bribes.
They’re calling for a new Egypt, one that we build with the same values and principles that allowed the revolution to triumph. They’ve also arranged several marches aimed at welcoming back the tourists and assuring them that we are waiting for all of them with open arms, eager and ready to start our new era of change alongside them. 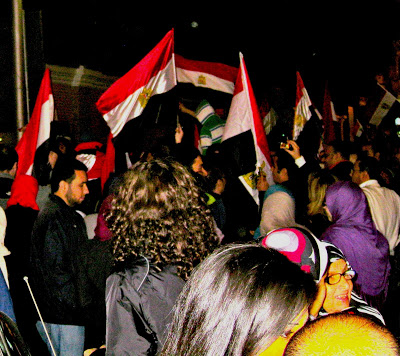 Jubilant crowd in Cairo, Feb. 11, 2011
YJI Photo
Besides the social change on Egypt’s streets, there have also been various political alterations.
The Armed Forces High Council dissolved both divisions of the parliament because of doubts about their legitimacy and put a committee in charge of making the needed constitutional changes to ensure fair and clean presidential and parliamentary elections.
The committee is supposed to be done in a matter of days so that the changes will be ready for a public survey in a month or two.
The Armed Forces High Council also made some changes to the cabinet headed by Prime Minister Ahmed Shafik, eliminating all figures that had been surrounded with any corruption or exploitation related to the previous regime.
This has considerably comforted a lot of people, but others still maintain that as a symbol of the previous system, Shafik should also be excluded and a whole new cabinet formed.
Trust in the army is elevating day by day. Three ex-ministers and a prominent businessman who had been an important figure of the National Democratic Party, have been arrested pending investigations concerning exploitation and embezzlement charges, and two of them have already been referred to criminal court.
Other businessmen and ministers have had their accounts frozen and their names put on a ‘forbidden to travel’ list.
The Ministry for Foreign Affairs has also sent international requests to various European countries to freeze and hold any accounts belonging to a number of people, including Mubarak and his immediate family. Such actions have raised the level of confidence that the army is not helping anyone or maintaining any ties, as some people had earlier feared.
I believe that the country is in good hands, especially after three of the High Council’s members appeared on an Egyptian talk show last night and answered all the people’s inquiries.
They were very transparent, reassuring and straightforward, calming fears and silencing any doubts. The changes made to the cabinet appear sound and they are doing their best to return the country to a state of security and normalcy. They are aware of the extreme level of corruption the country had reached in Mubarak’s last few years and they are slowly taking steps toward fixing it.
I, for one, have faith in their decisions. I also believe they will stand by their promise that in six months’ time they will be ready to hand over the country to a civil government.
Egypt is on the track to recovery from a severe and long-term illness, but in no time, it will be able to get back on its feet and redeem its name.
Today, I’m prouder than ever to be an Egyptian and I’m ready to take my place alongside my friends, neighbors and fellow Egyptians to restore our beloved nation.
We’ve heard what the world thinks and we’re pleased and glad the revolution conveyed such a true and positive impression of Egyptians.
I’m sure I speak for every Egyptian when I invite each one of you to the land of the pyramids.
I promise you a time you’ll never forget – during a new beginning and a new epoch of hope.
********
Youth Journalism International’s annual journalism contest is underway.
See http://www.youthjournalism.org/ for details.