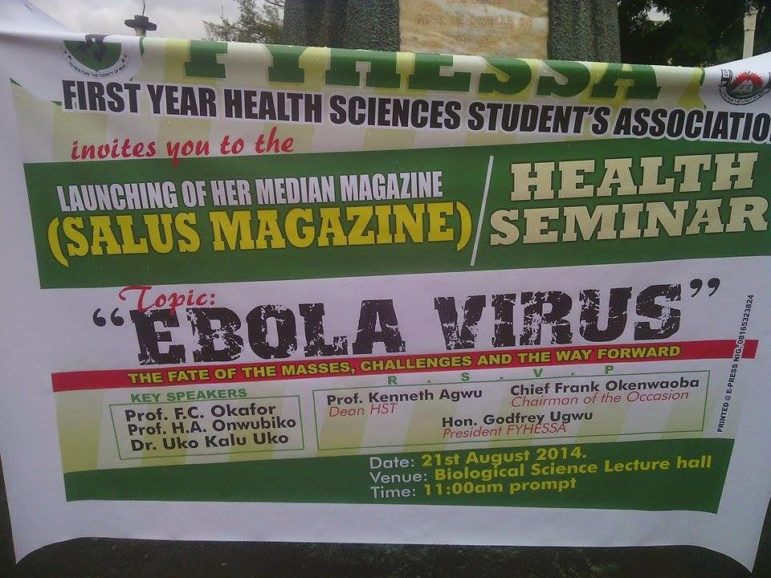 A banner hanging at Freedom Square on the University of Nigeria campus in Nsukka. (Linus Okechukwu/YJI)

NSUKKA, Enugu, Nigeria – Gone are the days when we shook hands and hugged each other without trepidation, the days when handshakes during church services were a way of showing unconditional love for one another. Now we’ve transitioned into a new, harrowing phase of reality: no more handshakes. No hugs. Just wry smiles adorning the corners of our mouths.
There was a time was when I could hug my friends without a troubling sense of premonition. But times have also changed, and change we must.
This is the new reality we face as we continually live in dread of the burgeoning Ebola virus, which, according to the U.S. Centers for Disease Control, is suspected to have killed 1,552 people in the West African countries of Guinea, Sierra Leone, Liberia and Nigeria.
Our lives, thoughts and daily experiences are all shaped by merely listening, reading or watching the news about the deadly epidemic that has no vaccine or cure, except for experimental ones.

We have become accustomed to shaking hands and exchanging pleasantries as we greet friends and acquaintances, but there’s a new reality. Most of my friends will, as always, say hello, but their hands remain safely ensconced in the pockets of their trousers. Or they might not be in the pockets, but the fact that there is no extension of the hands to call for a handshake obliquely tells you, ‘There is Ebola and a mere handshake could make me a patient.’
I remember waking up to missed calls and text messages from my brother and friends a fortnight ago. It was far into the wee hours of morning, around 4 a.m., and there was pandemonium. All I could hear from my bed were hoots of laughter and strange talks about how a water and salt solution could cure and prevent people from getting infected with Ebola.
I was deluged by a barrage of text messages telling me why it was imperative to use warm water and salt solution to take my bath as it’s been discovered that the solution could act as a preventive measure against the virus. Startled by the sheer inanity of the rumor, I switched off my phone and remained glued to the local campus radio which serves us our daily diet of news.
It all turned out to be false.
Of course, it was a blatant disregard for courtesy and a joke of sorts, but the amazing thing is that many people fell into the trap of using the solution, believing in its efficacy to ward off Ebola.
There is a saying that’s gained widespread significance and acceptance among Africans, especially Nigerians:  Prevention is better than a cure. And it was partly the reason why getting thousands of Nigerians to concur with the salt-and-water news was a breeze because our minds are conditioned to believe that taking necessary precautions is the ideal in such situations.
There is this growing consciousness about the whole situation in West Africa and things cannot help but change. Awareness campaigns on radio and television stations are commonplace, and nowadays, on the streets you can see placard-wielding students or others from non-governmental organizations telling people why leading hygienic lifestyles is vital to societal well-being.
The outbreak of the virus in West Africa has actuated a myriad of changes. People simply avoid making body contact with others, and Ebola is perched on the lips of virtually everyone – young and old alike. Handshakes are dreaded like diseases.
Words like ‘virus,’ ‘death,’ ‘victims,’ ‘quarantine,’ and ‘patients’ have become associated with Ebola, and we have heard them reused over and again, such that the slightest mention of any of them gets our rapt attention.
Sometimes we act like there is no disease called Ebola and get back to leading our normal lives. But a single story confirming further deaths or victims jolts us back into reality. The grim task of coming to grips with the facts leaves a sour taste in our mouths.
The statistics are not encouraging. There is a steady rise in illness and death and talk of multi-national corporations leaving the worst-hit countries out of fear of the virus.
This, and border closures which hurt trade, open up an economic dimension to the outbreak. So, beyond the health challenges posed by the virus, it appears the epidemic is having a significant and devastating impact on the economies of Sierra Leone, Guinea and Liberia.
Derived from the River Ebola in the Democratic Republic of Congo, Ebola causes an often fatal hemorrhagic fever and is highly contagious. Symptoms include high fever, bleeding and central nervous system damage. The fatality rate can reach about 90 percent, but the current outbreak has about 55 percent, according to the BBC.
Is there any hope for an Ebola patient? Yes, according to BBC reports that say supportive care such as rehydrating patients who have diarrhea and vomiting can help recovery.
Currently, Liberia is the world’s worst hit by Ebola, according to statistics reported by the Centers for Disease Control, with nearly 700 suspected dead.  Nigeria appears to be relatively free with just 13 confirmed cases and six deaths, according to the CDC.
Patrick Sawyer, an American from Liberia who stopped in Lagos, Nigeria on his way home from Liberia, died in July at a hospital in Lagos – a city with about 20 million residents. A doctor and nurse who cared for him in Lagos have since died of Ebola.
The governments of the affected countries and the World Health Organization are to be commended for taking the outbreak seriously and understanding that it is something which requires an urgent response.
But more awareness is crucially needed for public health as many people still refuse to admit that there is any such thing as Ebola especially in a place like Nigeria, which has been relatively low hit.
Healthcare systems should become a priority for African governments.
Some people tend to see the Ebola outbreak as something evil orchestrated by witchcraft, which goes to show why proper education is vital in the struggle to contain the disease.
Just last weekend, residents of West Point, a slum neighborhood of Monrovia, the capital of Liberia, attacked a quarantine center, looting mattresses and helping suspected Ebola patients leave. Also, the recent clashes with police in areas singled out for quarantine in the same country show how little people heed government warnings about the virus.
A lot has changed with regards to social interaction in Nigeria, but we are hopeful that we’ll get back to our normal way of life soon.
Linus Okechukwu is a Senior Reporter for Youth Journalism International. 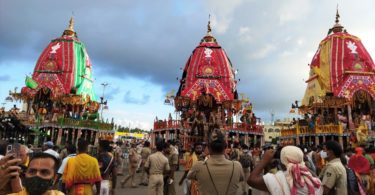 Festivals come every month in India, offering a fun, colorful torch of hope for people to help them...