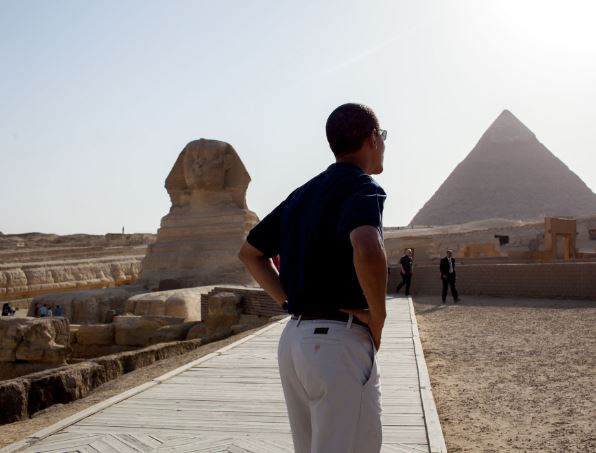 Barack Obama in Egypt (White House photo)
ALEXANDRIA, Egypt – Though I’d prefer not to be cynical, it’s the only way I can explain some of the things that went on in the heads of the people in the Arab world recently when Barack Obama made his speech on the Middle East and North Africa.

For the U.S. president to say things like, “Two leaders have stepped aside. More may follow,” can actually make an old man in a coffee shop in downtown Cairo really upset, thinking, they didn’t step aside, they were forced to.
Now for some economic wisdom.
“In a global economy based on knowledge and innovation, no development strategy can be based solely upon what comes out of the ground,” Obama said.
As brilliant as that sounds, many will argue that without money, there is no space for innovation.
Then Obama adds, “Antagonism toward Israel became the only acceptable outlet for political expression.”
Hmm, I hope he understands that people who support Palestine and its freedom criticize and “antagonize” Israel because they understand the truth about the occupation.