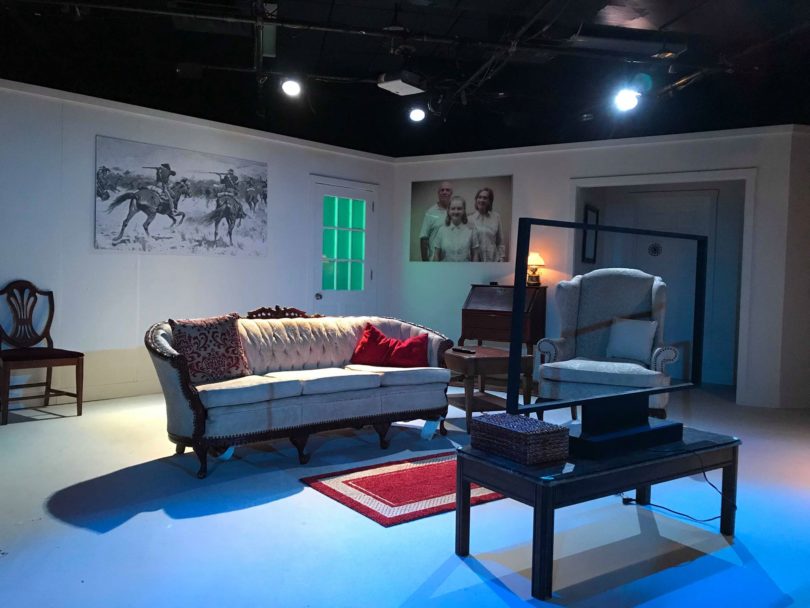 BOSTON – At the end of Zeitgeist Stage Company’s 18-year run, playwright Jacques Lamarre’s Trigger Warning offers a unique perspective of suffering and survival on one of the greatest American tragedies.

A fictional story set in the real-life Connecticut town of Plainville, Trigger Warning plays out every parent’s worst nightmare: a call that informs Murph (Steve Auger) and Jackie (Liz Adams) that their children are under lockdown for an active school shooting. Soon, they face the consequences of living the truth about their children and the family is irreparably shattered.

Hounded by reporters and under virtual house arrest, they slowly lose their grasp on their former life.

There have been other plays about school shootings. What makes Trigger Warning so unsettling is not just its unique premise of narration or the overwhelming feeling of aggravation that hangs under the stage lights but also the amalgamation of David J. Miller’s directing, Michael Clark Wonson’s lighting design, and Michael Flowers’ set and production design.

The audience sees the family through the frame of a living room television as Murph, Jackie, their daughter Meghan (Lilly Brenneman) and Jackie’s sister Amy (Kelley Estes) repeatedly fight and hug it out on the couch.

Behind the couch, the audience can see two ostensible decorations: A painting of rifle-clad soldiers at the massacre of Native Americans at Wounded Knee and a family photo. In this way, Murph, a National Rifle Association gun safety instructor, can tell visitors that “guns are family.”

A work of fiction itself, the play never hesitates to reference very real and familiar tragedies – Newtown, Aurora, Columbine and Parkland, to name a few – reminding viewers that school shootings are a reality for too many Americans.

The sound effects of text chimes and dissonant yelling of reporters and projections of news coverage displayed across the wall converge into the family’s living room, exacerbating the family’s desperation and rendering the stage space more claustrophobic as the play progresses.

This becomes even more resonant through the cast’s acting. Brenneman who plays the teenage daughter, is currently a senior in high school. Estes, who plays her aunt, was a junior in high school during Columbine. Thus, this combination of actors embodies generation-transcending experiences, making their acting all the more authentic.

Despite the environment of fear, Lamarre and Miller injects pockets of laughter and moments of genuine love between family members.

People grapple with the terror of encountering a mass shooting, but the idea of knowing a mass shooter is one that far fewer of Americans are comfortable facing.

At times, Trigger Warning is frustrating to watch. The back-and-forth conversations between the family and the agonizing arguments can drown out logical paths to their shared grievance. The audience itself feels immured in the living room and the ever-perpetuating narrative that plays out like a cycle more than a progression. However, by the end, anyone watching realizes that the portrayal of this family is reality.

And like all endogenous and ceaseless cycles of gun-related tragedies that continue in America, Trigger Warning comes full circle. The play may not be comforting, but it’s well worth watching.

Trigger Warning runs until May 4 at the Boston Center for the Arts.

Yunkyo Kim is a Reporter and Mugdha Gurram is a Senior Correspondent with Youth Journalism International.