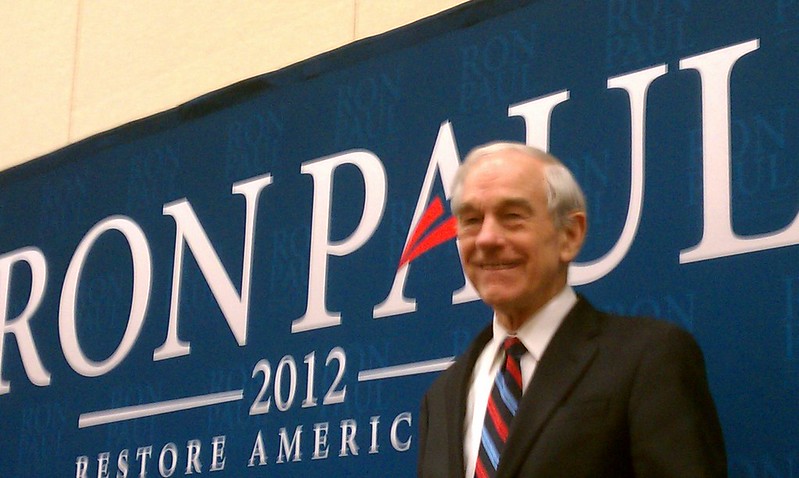 CEDAR FALLS, Iowa, U.S.A. — Republican presidential candidate Ron Paul told a crowd of supporters Monday that his libertarian message was gaining ground in Iowa.
“We’re hoping to send a very strong message tomorrow,” said Paul, one of a large field of candidates competing for the chance to be the Republican contender against U.S. President Barack Obama in November’s election.
Paul, who is hoping to triumph at the Tuesday caucuses, stuck to his campaign message, including his controversial position on the Federal Reserve.
“We really need to rein in the Federal Reserve, we need to audit the Federal Reserve,” said Paul.
He also maintained his reputation as a deficit hawk.
“We owe foreigners $3 trillion,” said Paul, who considers this unacceptable.
According to Paul, Federal Reserve Chairman Ben Bernanke’s efforts to relieve the European sovereign debt crisis are partly to blame.
“The Greeks, the Italians, the Spanish were living beyond their means,” Paul said, and he doesn’t think this is an American problem. Domestic bailouts are also largely wrong, according to Paul. “Stop the bailing out of the privileged class,” Paul said.
Despite his loathing for deficits, the longtime Texas congressman staked out a radical position on the federal income tax, calling for a return to the pre-1913 U.S. taxation policy.
“We didn’t even need an income tax,” said Paul, attributing that to the small size of the federal government a century ago. Paul says there should be a “limitation on how much taxes you could levy on the people.”
Among his followers, Paul has a reputation for being a staunch defender of the Constitution. 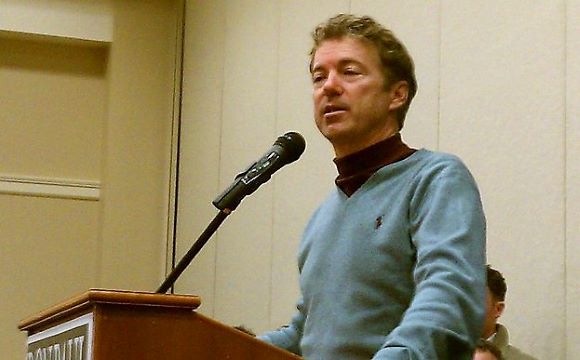 Twenty-three-year-old Alex Webb of Virginia, who attended the pre-caucus rally with family members from Iowa, said that Paul tries to keep government within its constitutional limits.
“He’s the only candidate who believes in limited government,” said Webb.
Paul also takes civil liberties very seriously. He voted against the National Defense Authorization Act, opposes the Stop Online Piracy Act, and thinks that “most, if not all, of the Patriot Act should be repealed.”
Some of those in attendance were still making up their minds.
“I’m here with my family learning about the candidates,” said Olivia Barnes, an 18-year-old freshman at Wartburg College from Traer, Iowa, who identified herself as an independent.
The congressman was introduced by his son, Kentucky Sen. Rand Paul, who said his dad is the only candidate who has stayed true to his beliefs.
“He’s really one of the only candidates who’s not changing his positions,” said Webb.
Some question Paul’s electability, though.
Alexis Russell, 19, a student at Hawkeye Community College, didn’t attend Paul’s event, but said he “has some good views.”
She said it’s good that he wants to do things, and not just “stand there.” However, she said his unorthodox positions might turn some people off.
“He might change the way of life for people a little too much, and that might scare people,” she said.
Russell said she’s excited about Iowa’s first-in-the-nation caucus, which kicks off the American primary season. She’s supporting former U.S. Sen. Rick Santorum of Pennsylvania.

“I like Santorum because he cares a lot about education because his daughter’s in education and I also support that laissez faire stuff that he supports,” Russell said.
Russell said she doesn’t have much use for candidates who opt out of the Iowa caucuses, like former Utah Gov. Jon Huntsman.
“The people who don’t make a point to show up, I think that shows something,” said Russell.
Paul, though, has spent a lot of time in Iowa.
“More people are giving him a chance” than did four years ago, said Elizabeth Webb, a student at the University of Virginia who attended the rally for Paul in Cedar Falls with her brother, cousin and grandparents.
Kiernan Majerus-Collins is a Senior Reporter for Youth Journalism International.