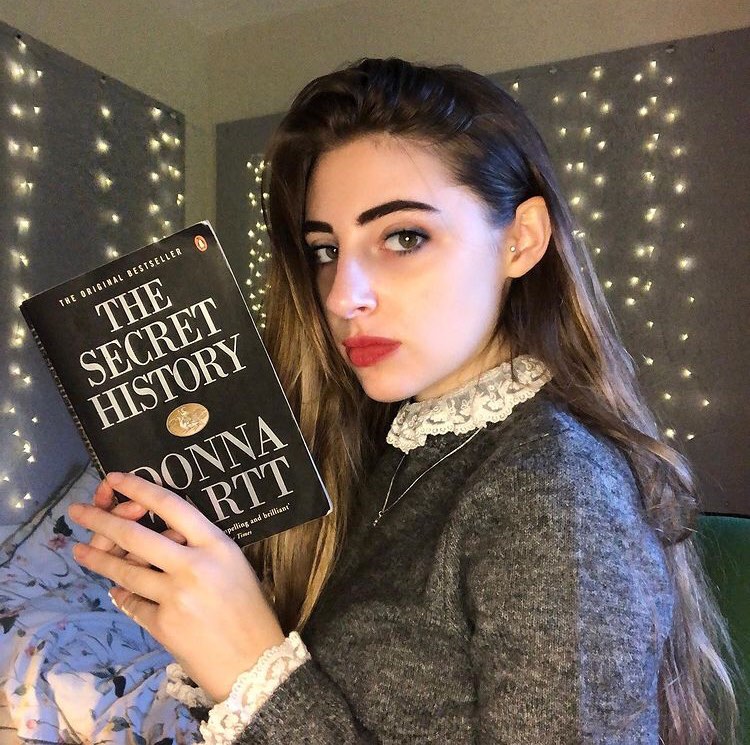 Jess Lees with her copy of "The Secret History" by Donna Tartt . (Photo courtesy of Jess Lees.)

The dark academia subculture has been on the rise since 2017, but with the pandemic bringing about a tumultuous start to the new school year, the trend has set social media ablaze.

Through TikTok, Instagram, YouTube, and Tumblr you are guaranteed to find plenty of teenagers embodying brooding 19th century scholars.

At its core, dark academia can be defined as a romanticization of learning and a deep longing for the vintage. And though there is no set way of immersing oneself in the sepia-toned alternate universe that the trend presents, the aesthetic can generally be embodied by an interest in the moody side of academics, arts, and literature.

Specific works can be accredited as contributing factors to the trend, and the aesthetic has moved its way to becoming a genre.

Donna Tartt’s The Secret History is considered to be a cult classic. The premise intertwines murder with Greek philosophy, and the overall aestheticism captures the allure of tweed jackets and scholarly devotions.

Any gothic work of fiction is much loved by dark academics as well, and worn copies of The Picture of Dorian Gray and Wuthering Heights make frequent appearances in the tag. Others have found their inspiration in films such as the darkly poetic Kill Your Darlings or in the classic academia movie Dead Poets Society.

Jess Lees, a 19-year-old university student at the University of Bristol, is one of many dark academia enthusiasts on Instagram.

Through her Instagram posts, Lees shares vignettes of her life through photos generally associated with the aesthetic: books, burnished autumn leaves, hand-written letters, and trips to museums and libraries.

When asked about what drew her into the trend, she said, “I am interested in the Victorian era and this encapsulated it very well with a modern twist. Dark academia also helped me fall in love more with studying as I could somewhat romanticize it.”

Lees said that the dark academia community has been particularly helpful during this pandemic, from giving warm-hearted support to “sharing the stresses of online learning.”

And recently the trend has become as much about the fashion as it is about the scholarly mindset.

A particular color scheme of muted browns and blacks are seen to be quite the staple, but inspiration can be drawn anywhere from the flamboyance of the Victorian era to the slouchy, tobacco-stained style of the beatniks.

“I buy most of my clothes thrifted or second hand, which works well with the vintage aesthetic of dark academia,” said Lees, labelling the style as ‘classic’ before mentioning among her favorite pieces a black turtleneck and plaid skirt.

Another participant in the dark academia community is Isabella Athena, an 18-year-old politics student from American University. On her YouTube channel, she’s created videos centered around the aesthetic for her 6,000 subscribers.

“During lockdown, this trend has given students something to be excited about when it comes to school,” Athena said.

It’s impacted her own perception on studying, Athena said.

“I now see my schoolwork less as work, but as something almost sacred. This romanticization of academia has made me treasure the knowledge that I get to learn on a much deeper level,” she said.

Despite the popularity it is garnering, there have been problematic aspects to the trend. The genre places heavy emphasis on pretentious boarding schools and universities as being part of the dark academia experience, and most have voiced that this often comes off as not only elitist, but incredibly Eurocentric.

Though some argue that this is unintentional, there is still a noticeable lack of diversity and an exclusion of Black, Indigenous and other people of color that many have become increasingly aware of.

Athena addressed these problematic facets of the subculture, emphasizing that participants should be reading works from all over the world and lifting up the voices of people of color.

Another issue that is frequently brought up is that the trend – with its fixation on the poeticism that can be found in dark themes – might encourage the romanticization of mental illnesses and alcoholism.

Softer subcultures have emerged in the wake of this criticism. A particularly flourishing one is light academia, which, with its paler colors and somewhat lighter themes, is described as an emotional opposite.

Though it cannot be denied that there are improvements that need to be made in the dark academia subculture, many students in this pandemic have still found warmth and motivation in its core emphasis of an endless pursuit of learning and a boundless love for knowledge.

And with members of the community striving to improve and reform ideas of what dark academia should be, it is slowly working its way to becoming a wholly inclusive space.

Justine Gianna Topacio is a Reporter with Youth Journalism International.

Justine Gianna Topacio is a Reporter with Youth Journalism International from the Philippines.