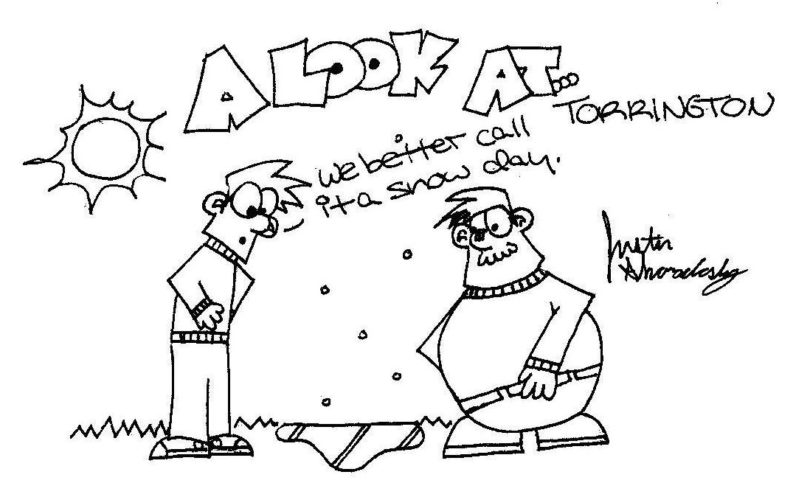 BRISTOL, Connecticut, U.S.A. — Whenever snowflakes fall, kids watch the weather reports and pray fervently for a snow day.
Most students don’t know everything that goes into calling off school.
“I think they look at the weather the night before, but hold out into the morning to see if it will clear up,” said Nicole Dube, a sophomore at Bristol Eastern High School.
“They probably have to look at the weather patterns to see where it is going to hit,” said freshman Amber Brown.
Sophomore Krystle Kozuch said, “I don’t know, I think they should just close it.”

But declaring a snow day is a complicated process.
Roads have to be checked, people have to be called, deadlines have to be met, and weather forecasts need to be reliable, or a bogus decision might be made.
It all starts at 3 or 4 a.m. when Vincent Bartucca, the supervisor of buildings and grounds for the Bristol school district, heads out to check the city’s roads. Areas such as Witches Rock Road, Wolcott Street, Willis Street, Peacedale Street, and other sloping roads are checked first, according to Superintendent Michael Wasta.
Bartucca gets back to Wasta by 5 a.m., when a conference call is made between Bristol and officials from surrounding towns, to get their input on road conditions and decisions.
Wasta also keeps his eye on media outlet forecasts, to help make his decision.
Wasta contacts the Bartucca by 5:15 a.m., the superintendent said, and he tries to have a final decision by 5:30.
Once the decision is made, a phone chain begins with four to five people on the district staff. “One person on the chain is responsible for calling the media outlets to tell them what the Bristol public schools is doing,” said Wasta.
The chain then reaches all faculty and staff of the public schools in Bristol.
Rather than physically checking the roads himself, Wasta said he relies completely on information from others to make his decisions.
Delays run along the same lines as closings, except some new factors are taken into consideration.
“A major issue with a delay is timing,” said Wasta.
Bristol schools must clear all parking lots and about 30 miles of public sidewalk before opening school each day, Wasta said.
Bristol used to have three types of delays, Wasta said, a one-hour delay, a 90-minute delay, and a two-hour delay.
Wasta said that people became confused over the different delays, so the district switched to just a 90-minute delay, closing completely, or keeping school open and on time.
A couple of weeks ago Bristol closed for a “wind chill day.”
“The wind chill day was interesting, because it was the first time that we have ever done that before,” said Wasta. “The wind chill readings were up to 30 below that morning.”
In Bristol, 65 to 75 percent of students take the bus and 30 to 35 percent walk, which is dangerous in severe wind chill.
Wasta said such low wind chill temperatures can give exposed skin frostbite in just 10 minutes.
“So we called the superintendents in states such as Maine and Wisconsin and asked them what their policies on wind chills was,” said Wasta. “Those are places that deal with this quite often.”
He found out that wind chills that are at least 25 to 30 below zero will close school, Wasta said. Based on that and other information, he said, school was closed that day.
Occasionally, even the best forecasts fail.
“We are pretty good at our decisions, but we do make mistakes,” Wasta said.
“Sometimes we have a really bad snowstorm forecasted, so we close school early, and nothing comes.”
“You do have to remember that this is New England, and the weather always changing, so it’s hard to get perfect 100 percent of the time,” said Wasta.
Whether or not they know all the work that goes into canceling school, most students are just hoping for that extra hour of sleep.

Eric Simmons is a Reporter for Youth Journalism International.