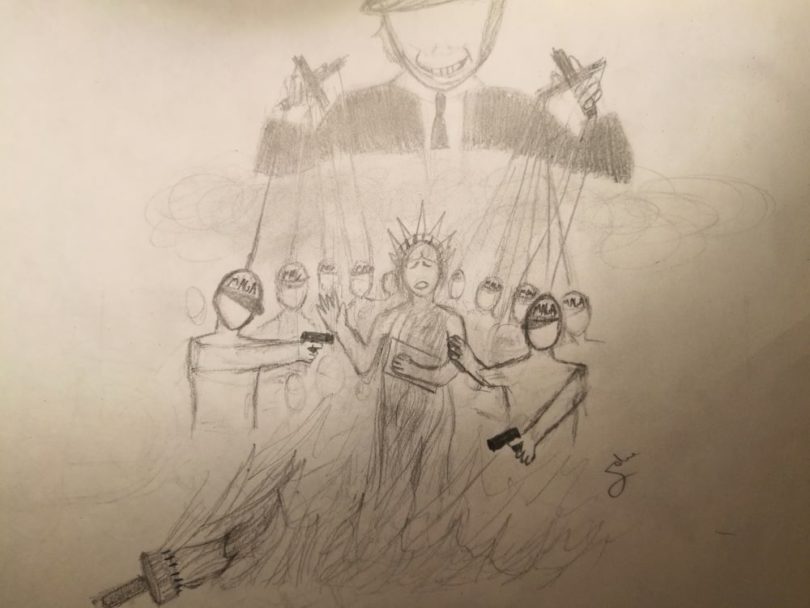 Suffolk, Virginia, U.S.A. – Call me paranoid, but it did seem that the first few days of 2021 were going by unusually smoothly. Now, though, we’ve hit one of the first major bumps in the road – a mob of Trump supporters storming Capitol Hill and disturbing the vote count of the Electoral College.

It’s been odd watching the live updates on TV and listening to the shocked proclamations of various news anchors and members of Congress who were interviewed. There was a huge contrast between their perspectives and my own reaction.

Of course, the news is disturbing, but to me, it was by no means surprising.

All of the nonsense Trump has been spouting about the integrity of the election for the past few months to whoever would listen – which is a large number of people, unfortunately – has been building up to this moment.

And when you consider the fact that he spent the preceding weeks spurring his supporters into protesting, what else could anyone really expect?

He has shown himself, over these last four years, to thrive amid chaos and division. That is where he feels right at home, stoking the flames of our differences rather than putting them out. As such, the notion of calling upon him – the cause of this entire situation in the first place – to diffuse the tension is laughable.

And he certainly delivered, with a completely disingenuous video telling his supporters to “go home” that was riddled with emphasis on the same exact point that he childishly will never concede, and warm remarks that did not serve to condemn the perpetrators of the violence, but instead condoned their actions.

President-Elect Joe Biden, in his speech denouncing the riots, also said that this is “not the true reflection of America,” which made me wonder, what is the true reflection, then? And more importantly, where is it? Because considering all that has happened since 2016, this strife seems very much like what America has become.

This becomes especially apparent when you compare the reactions of law enforcement to Black Lives Matters protests – which are conducted peacefully the majority of the time, and more importantly, for a genuine cause – to the disgusting and unwarranted actions of the mob on Wednesday.

While many members of Black Lives Matter demonstrations endured a great deal of harassment and assault for exercising their First Amendment rights, it appears that when it is a group of “Make American Great Again” Trump supporters storming a very important government building – transgressing beyond any rights that the Constitution protects – law enforcement is suddenly singing a different tune.

The double standards are sickening.

Trump may have lost the election, but when it comes to this manipulation game he is playing with the American population, he is winning. And while I would love to insert a call to action here, the truth is, I’m not entirely sure how to bridge the gap from which our country is suffering, and that uncertainty is a bit terrifying.

Because as much as Trump deserves to be blamed for exacerbating conflicts, these supporters of his and the hateful sentiments that they stand for have always existed – perhaps they were less evident before, but they were always there.

If it were not for his fanatics, Trump would not have the amount of power that he has right now. And though he will be leaving office in two weeks, he has ensured that his legacy lives on through people akin to those who took part in the riots today.

Clearly, the coronavirus is not the only disease that is running rampant in America – so is hatred in its many forms.