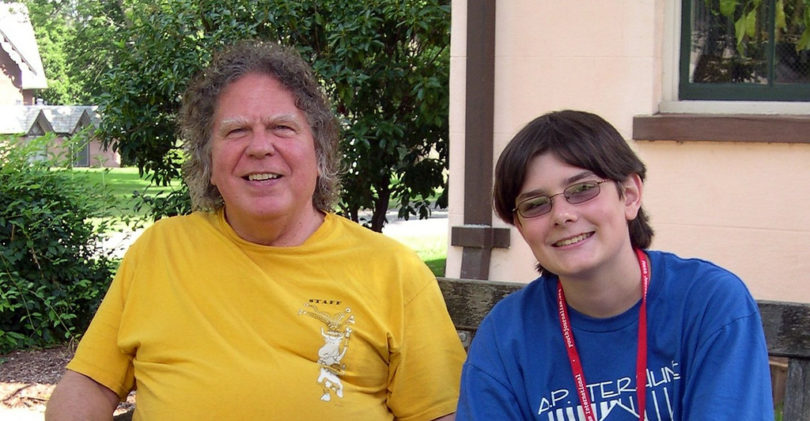 MIDDLETOWN, Connecticut, U.S.A. – As I waited on Wesleyan University’s campus for Professor Neely Bruce – who told me he had been “composing on deadline” that morning – I thought about how lucky I was to have this awesome opportunity to interview a world-class composer.

After hearing Professor Bruce’s Introduction and Grand March at a rehearsal and later, at a concert last spring, I wanted to hear more of his music. I liked it and wanted to learn about what he wrote. 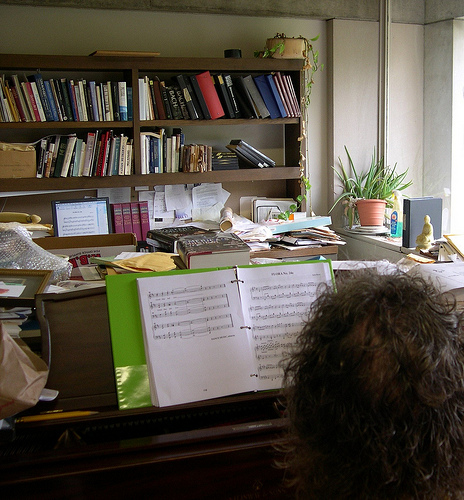 But I was supposed to be doing an interview, and I didn’t know how I’d be able to hear his music. Luckily, I didn’t have to worry.

Professor Bruce not only played some of his music for me, I was the first one to hear the final dance music to his new opera, Flora.

It had an uplifting lilt, and he played it beautifully on the Steinway grand piano inside his office.

He gave me the job of turning the pages of the music as he played. I know how to read music, but I’d never done that before. I was afraid I’d miss the page turns, but I managed them okay. As soon as I made the last page turn, I could relax and enjoy the music.

While we were talking in his office, Professor Bruce also showed me all the vocal scores to Flora. It was very interesting to see how the vocal themes were echoed in the dance music.

This terrific musician has a very cluttered office. Piles of music covered everything, even the piano.

An astounding number of intriguing music books, including a set on the history of opera and others on composers crammed the shelves on three walls. The only places there weren’t shelves with books spilling out were the windows and the door.

A narrow path through the papers led from the door to the seat at the piano and then on to the chair at his computer, which was surrounded by stacks of paper.

But his keyboards where he composes – on the piano and on the computer – remained perfectly clear.

The office clearly gets a lot of use. There was no dust, but a glance at the sickly-looking plants on the windowsill showed that Professor Bruce focuses his attention on his music and not on them.

I thought his office was awesome.

Professor Bruce is a distinguished composer, but he’s also a generous and down-to-earth guy. Aside from showing me his own compositions, I felt honored that he even took a few minutes on a busy day to look at mine.

He really made me feel at home and my time with him was a blast. I think he would be a splendid teacher.

I learned a lot from him about composition, and I was just doing an interview. He kind of spills out knowledge and you can’t help but take it in.

My visit with him made me appreciate composition all the more, and is inspiring me to keep working on my own pieces.