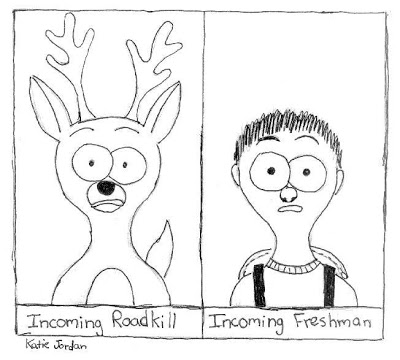 Brisbane, Queensland, Australia – In Brisbane, we don’t call first year high school students freshmen, we call them veggies – which, now that I see it in writing, actually sounds funnier than freshmen.

I’m not entirely certain why they’re called veggies, but I was called a veggie countless times in my first year of high school, and I called many first year students veggies when I became old enough.

My friends suppose we call veggies veggies because they’re ‘fresh to the market.’

We also thought veggies could have a demeaning connotation to it, since it’s a term for people who are declared brain dead. That’s not very nice, but high school isn’t very nice.

I am currently in my final year of high school (which is year 12 in Brisbane). I have three months to go until the ‘real world’ comes closing in on me, and I’ve already begun to contemplate my time in high school.

The good. The bad. The man-I-wish-I’d-known-that-in-grade-eight.

I’d summarize the high school experience this way: It’s not what you think it’s going to be.

I walked into my first year with excitement, anxiety and the assumption that I knew how the whole five years of my high school career would pan out.

Oh, how very wrong I was.

I remember having the biggest crush on this guy in grade eight, only to be rudely rejected by him. I felt utterly worthless and certain he would never return my affections. Now, as a year twelve student and having lost all feelings for this guy, I am constantly annoyed by his attention.

High school is definitely not what you expect. People you never in a million years would have pictured becoming friends are friends. You would’ve bet your life savings that two people would never go out, and they end up falling deeply in love. People who you thought would never be stripped of their star at the top of the academic board get their first failing grade.

So I’ll finish off with my top three tips to surviving high school:

Nancy Hsu is a Junior Reporter for Youth Journalism International.