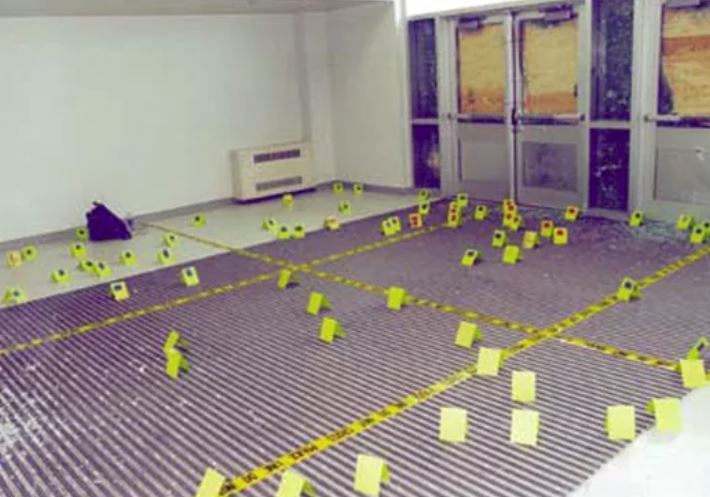 From the Jefferson County Sheriff's Dept.

BRISTOL, Connecticut, U.S.A. — I was sitting there, a pile of tissues on the floor all around me, sobbing over the loss of a character on my favorite soap opera when I heard about it. Dan Rather
interrupted my program to bring me the latest news out of Littleton, Colorado.

My first reaction to the school shooting was, “Here we go again.”

But as the story unfolded I realized that this one was a little worse than the others. That — what? — there were bombs now? And deputies were opening fire? Everything was growing confused and chaotic and my jaw was on the ground.

I really didn’t know why I was so surprised. Things like this happen in America. Psycho kids killing each other, bomb-making recipes on the Internet, guns for sale on your local street corner.

But, yes, I was surprised. I was mortified to think that right at that very moment there were kids my own age getting shot in the “safety” of their own school. I was trying to fathom what they could be thinking, but I couldn’t.

Just then, something truly symbolic happened. Rather signed off, and my soap came back on.

And do you know what I did? I didn’t call my mother at work to see if she’d heard about it. I didn’t go on a rampage about how things like this shouldn’t happen. I didn’t even think about those kids in Colorado. I went back to watching my soap. Because if it wasn’t me, it wasn’t real.

I think that’s the attitude a lot of people in America have. Unless something like this happens close to home, the shock is just not enough to set people in motion.

No one does anything until it’s too late. No one pays attention until it blows up in their face. How many times has this happened the past decade? Three? Hello! That’s got to say something.

I’m halfway waking myself up here. too. Because this will bother me for a while, but all the while I know it will never happen to me. And the chances are it won’t, but it could. Who really knows for sure?

The thing that upsets me the most about the whole thing is that these people were allowed to die — that two kids were allowed to get their hands on bomb-making materials and guns, walk into a school and open fire. No one could do a thing. No one saw it coming. No one was prepared.

It’s tragic, it’s sad, it’s depressing, and it’s really, really frustrating to know that even after this has happened the world will move and shake for a while, but when the fear and shock have worn off, we’ll slide right back into steady slow motion.

We’ll have our guard down, we’ll be sitting pretty with our metal detectors and see-through backpacks, and you know what? It’ll happen again.

Which makes me wonder if the problem really lies there, with the tangible problems like guns and bombs, or in the kids who are committing these terrorist acts.

Whatever it is, can we fix it? Can we ever be ready for it? Unless it’s happened to us, are we scared enough to really care? I don’t know. I actually think I’m more scared of the not knowing than of some lunatic shooting me in the lunch line.

And while I feel for the children in Colorado, I don’t feel it enough to miss my soap tomorrow.

Laura Lindstrom is a Reporter at Youth Journalism International.