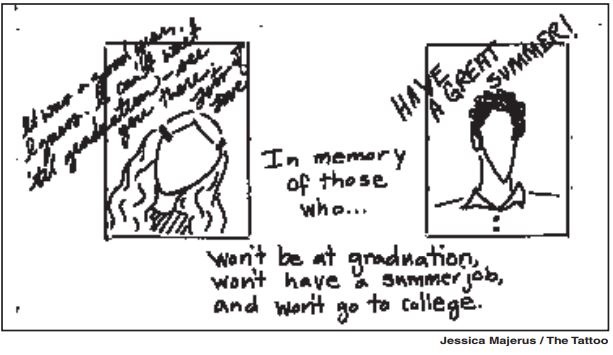 BRISTOL, Connecticut, U.S.A. — On the anniversary of Adolf Hitler’s birthday, two guys dressed in black trench coats entered a school in Littleton, Colorado never to leave alive. They brought
with them a bloodbath that once again turned a naive nation on its ear.

The shootings at Columbine High School terrified, confused and shocked the world with the brutal reality of this violence. It left many wondering if this type of tragedy could be avoided. And, even scarier, if their school could be next.

Many believe it is nearly impossible to prevent potential episodes

Dave Albert, a Bristol parent, said, “I think it can happen anywhere, but you never think it will happen to you. You really can’t control it and there’s no way to stop it.”

Josh Krampitz, a senior at Bristol Central High School, said that events like these can’t be controlled by laws or regulations.

“That’s something you really can’t prepare for. There’s no protection against people who aren’t thinking rationally,” said Krampitz.

With around a dozen school shootings over the last three years, parents and students alike are thinking twice about school safety.

Chris Wilson, a Bristol father of three said, “Anyone would be concerned that something like that would happen in your school.”

Bristol Eastern freshman Nikki Botteon said she asked herself if an incident like the one at Littleton could happen at her school.

Although Wilson was concerned, he said that Bristol schools are “as safe as can be.”

The shootings made others wary of students with particular social affiliations.

A seventh grader at Chippens Hill Middle School, Morgan Nigro, said of the Colorado massacre, “It makes me nervous because we have a lot of punks at our school.”

Chris Fortner, a freshman at the University of Minnesota at Duluth, thinks the media’s portrayal of the killers as “punks” or “gothics” will only inflame the situation further.

“There was no need to discuss what type of students these people hung out with or how they chose to identify themselves, especially since there was no confirmation of who these people were,” Fortner said. “If the students who did this had been on the football team or involved in sports … we all know that they’d be called ‘these seemingly normal students.'”

Pat Flaherty, a teacher at Tootin’ Hills Elementary School in Simsbury, said that even though she’s not nervous about similar incidents occurring she is “concerned about the children’s safety in school.”

“I don’t know if you could prevent it and it’s so hard to enforce rules nowadays because of lawsuits,” she added.

Flaherty also said of the “Trench Coat Mafia” at Columbine High School, “They shouldn’t be allowed to wear trench coats. They conceal weapons.”

“It’s sad, but I believe that if this keeps on happening, metal detectors may need to be installed,” Flaherty said.

Richard and Myrtle Ouellette of Bristol commented on the shooting not only as parents, but as grandparents.

“It was the worst thing that could’ve ever happened,” Richard Ouellette said. “They should’ve had more security around the school in the first place.”

Myrtle Ouellette expressed her disbelief that kids “have that much guts to kill each other,” and the amount of leeway schools allow.

Albert, the Bristol father, said he’s sure the parents of the victims in Colorado are “angry at everybody.”

Miriam Gustafson, a senior at Northfield Mount Hermon School in Northfield, Mass., said the notion of a “Trench Coat Mafia” is silly.

“Perhaps the beauty and almost idyllic atmosphere makes places like Colorado seem very far away,” Gustafson said. “Kids here are concerned about the shooting there were numerous requests for prayer and remembrances on our school network.”

Whether these murderers seem ridiculous, scary, or otherwise, most believe you can’t let fear reign.

“You have to live your life and not hold back,” Consonni said.