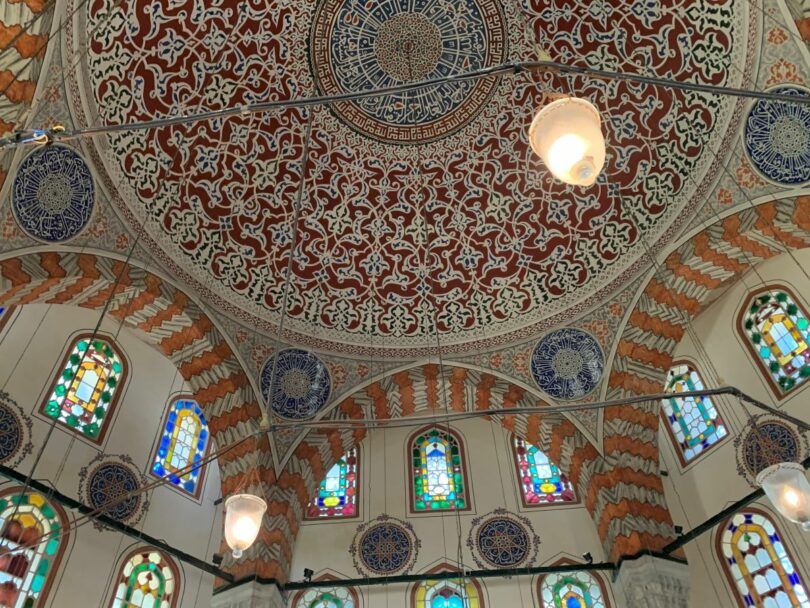 Inside the Hagia Sophia (Norah Springborn/YJI)

ISTANBUL – It’s strange that after years of consistency, the norm you’ve always known can get dismantled in a week.

After growing up in a religious community and attending numerous church services all of your life, having a new experience with another religion changes your perspective.

Even though you are aware of the existence of other religions, that idea might not sink in until you see it face to face.

Knowing about the existence of Islam appears to be just a word until you see a mosque.

The giant central dome with its stunning patterns, the thick outer walls, and the Minaret (the tall surrounding towers), all seem like a Google search that will never come true until you are in the main entrance, taking off your shoes.

It’s the sudden realization that you’re about to experience a vital aspect of a religion you’ve heard so much about but haven’t been able to witness.

Five times a day, Istanbul, Türkiye, is filled with the loud sounds of the Islamic call to prayer booming from the speakers of the many mosques.

During Youth Journalism International Global Conference in June, we visited Hagia Sophia and the Blue Mosque, two of Istanbul’s iconic places of worship.

Seeing a mosque for the first time is intimidating. The massive building, with ancient old architecture, appears an exciting site to experience.

Stepping inside opened a door into a new world we hadn’t yet experienced.

Even before entering, there is a dress code. Long leg coverings like pants and skirts are required for everyone and headscarves are necessary for women.

Then, it’s essential to enter the mosque barefoot – or wearing socks – as that is what is outlined in Islamic rules.

Once inside in the general area, arrows point towards the women’s and men’s sections of the mosque. The genders are divided during prayer time and not allowed to cross into the other’s area.

It’s easy to notice the differences and similarities from the religious norms we grew accustomed to in childhood.

Some might be subtle, but the important aspect is to develop understanding through all religions. This experience allows you to live through the eyes of another person’s faith and discover aspects that otherwise you would never know.

Norah Springborn and Ana Fadul are Correspondents with Youth Journalism International. Springborn is from Pekin, Illinois, U.S.A., and Fadul is from Bogotá, Colombia.

See YJI’s entire Istanbul Adventures by clicking on the logo below: