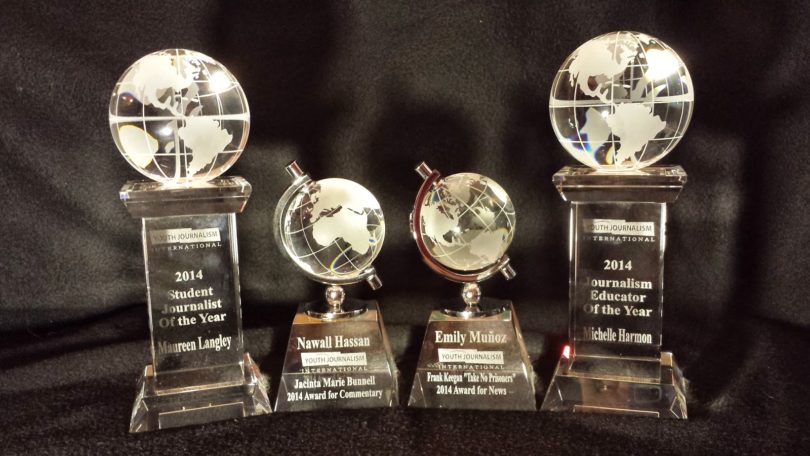 Crystal trophies went to the winners of the top four categories in Youth Journalism International's  2014 Excellence in Journalism contest.

“It’s inspiring to see so much promise from young journalists around the world,” said YJI’s Executive Director Jackie Majerus. “We’re excited to be able to recognize it with this contest.”

Maureen Langley of Bloomington,
Indiana, is the 2014 Student Journalist of the Year.
Langley, who will be a senior at the
school next fall, said she likes every aspect of journalism – the design, the
photography, the editing, writing and interviewing.
“I like to make people sweat when I
ask them questions,” Langley said.
Her advisor, Ryan Gunterman, called
Langley the best in a long line of top-notch students.
“She
is never satisfied with simply getting material completed, and lives every day
under the philosophy of ‘Good enough is never good or enough,’“ said Gunterman.
“She’s not a student journalist. She is a journalist.”
Michelle Harmon, who teaches at Borah
High School in Boise, Idaho, is the 2014 Journalism Educator of the Year.
Joy Wilson, who will be a co-editor
next fall in Harmon’s program, said Harmon, who has taught journalism at the
school for a decade, advocates for students in journalism and in life.
“She’s one of the most amazing women
I’ve ever met in my entire life,” said Wilson. “She knows what she’s doing.
It’s an honor to work under her.”
The top award for newswriting, the
Frank Keegan “Take No Prisoners” Award for News, went to Emily Muñoz of
Pflugerville High School, Pflugerville, Texas, for an in-depth piece she wrote
about rampant cheating in her school.
The highest award in opinion writing,
the Jacinta Marie Bunnell Award for Commentary, went to Nawall Hassan, a
student at Jeddah International School in Saudi Arabia. A Boston native, Hassan
wrote about the grief she felt when terrorists bombed the Boston Marathon.
The annual contest, now in its fifth
year, recognized student writing and reporting, art, photo and multi-media skills
in more than two dozen news, sports and opinion categories.

“As in past years, this year’s
judging was not easy,” said Wendy Riling, a Florida photographer who donates
her time each year to review entries. “The photos submitted were fresh and
insightful.”

In keeping with the nature of Youth
Journalism International, an educational non-profit organization with students
around the world, a diverse group of nearly two dozen judges from several
continents carefully evaluated the hundreds of entries that poured in from
around the globe.
Judge Mariechen Puchert of Cape Town,
South Africa, said she looked at the content, impact and style in each piece
and found it challenging because of the high quality of the work submitted.
“It was a privilege and honor to
review the work of so many talented students, said Lynn Abrahamson of Maryland,
another judge.
In all, more than 100 awards are
going to 74 teens from 12 U.S. states and the countries of Scotland, Vietnam,
Egypt, Pakistan, Japan, Kenya and Saudi Arabia.
Youth Journalism International has
been educating the next generation of news professionals and talented teens
since 1994. Formally incorporated in 2007, it is a 501(c)(3) educational
non-profit public charity. Its website can be found at www.youthjournalism.org.
The contest covered work published in
English between Jan. 1, 2013 and Dec. 31, 20132. Those
eligible must be 19 or under and not working professionally.
For more information, please contact
Jackie Majerus, Youth Journalism International’s executive director, at (860) 523-9632 in Connecticut or write to jmajerus@youthjournalism.org.
A complete list of winners, along
with judges’ comments in italics, is below and also posted online at www.youthjournalism.org.
STUDENT JOURNALIST OF THE YEAR 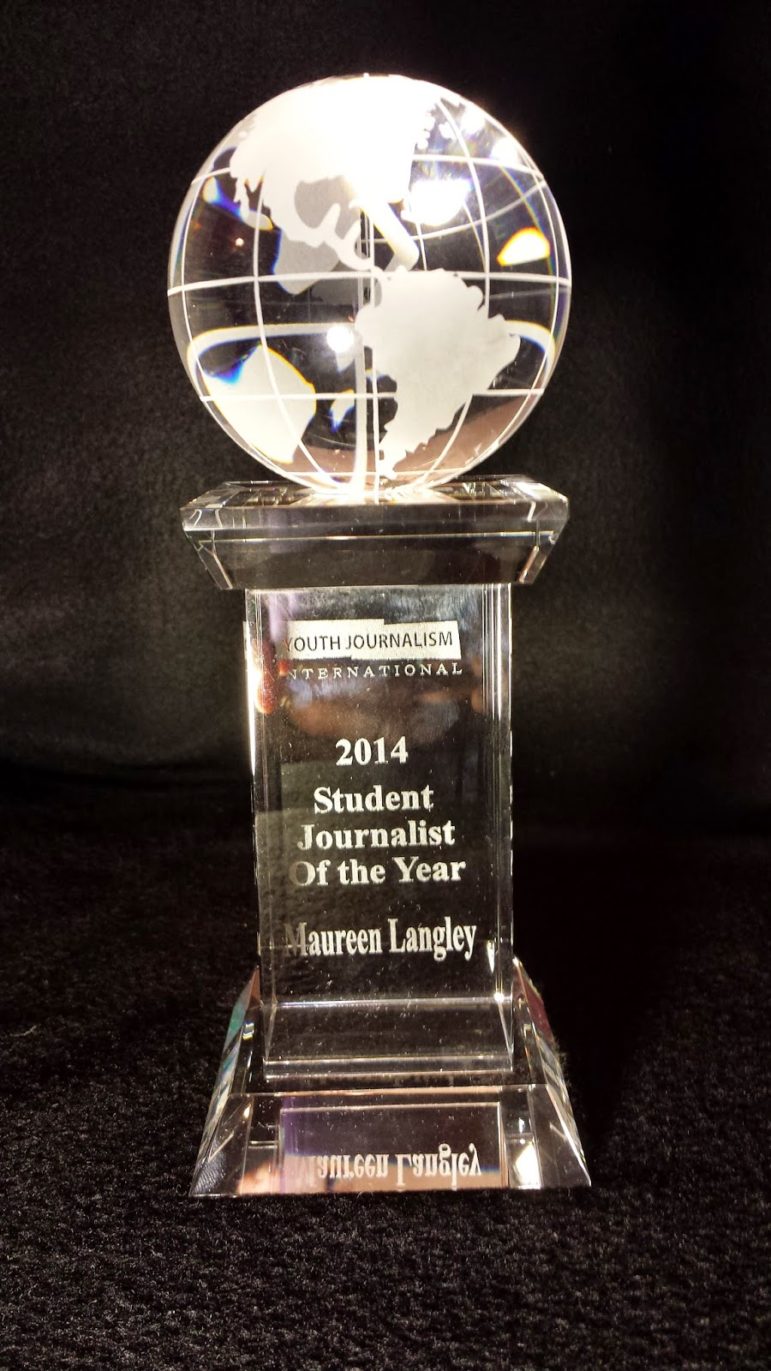 WINNER:
Maureen Langley, Bloomington High School
North, Bloomington, IN
Maureen’s work shows that she excels not only as a writer, but a
photographer, graphic designer and webmaster. She found a way to make the
Boston Marathon bombings resonate with readers faraway in Indiana when she
tracked down former students from her school who were in Boston that day and
captured their stories. Her photos are stunning, her web design impressive. The
personal essays she wrote are thoughtful and probing. She is a terrific example
of a promising young journalist who represents the future of the profession. We
look forward to seeing what Maureen does next with her considerable talents.
FINALIST: Anisha Datta, Glencoe High School,
Hillsboro, OR
FINALIST: Sabrina Leung, Carlmont High School,
Redwood City, California
FINALIST: Michelle Chavez, University of
Maryland 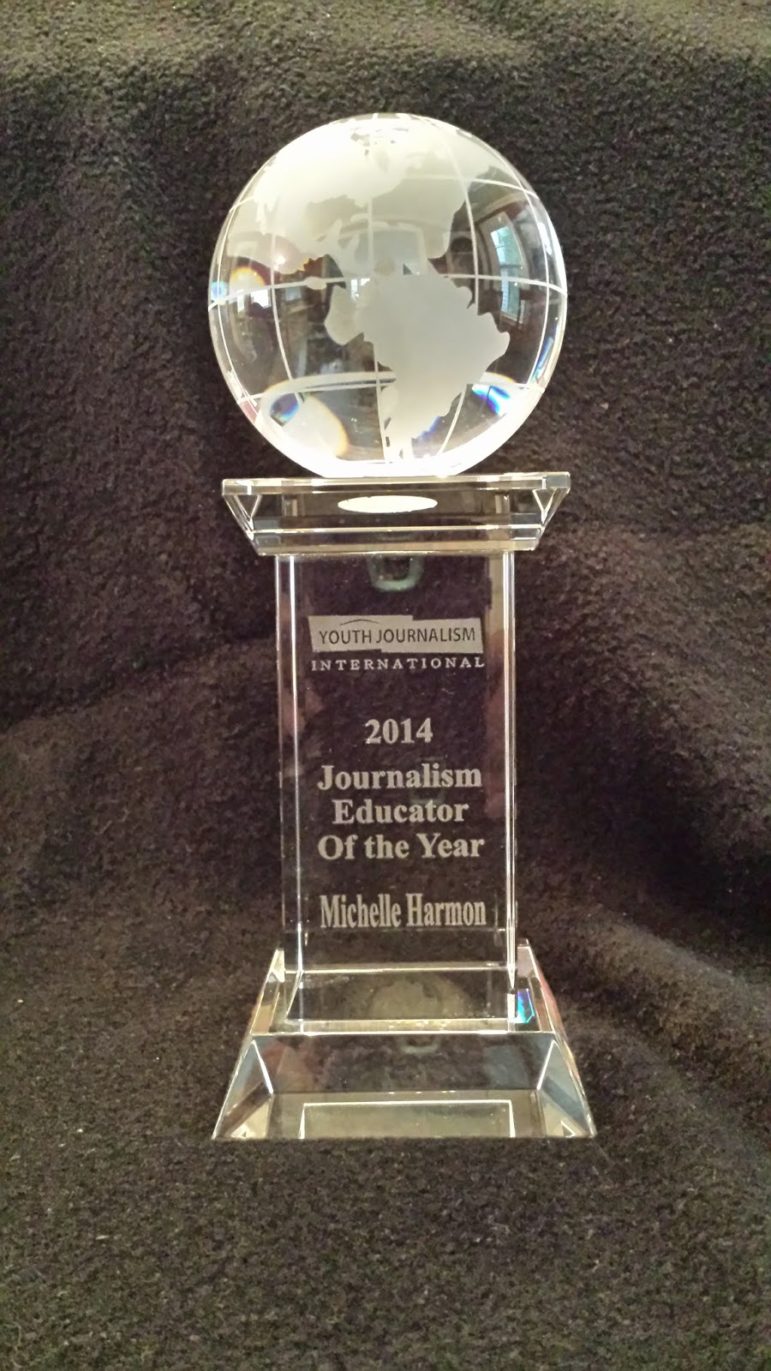 JOURNALISM EDUCATOR OF THE YEAR
WINNER:
Michelle Harmon, Borah High School,
Boise, Idaho
Ms. Harmon’s decade of dedication to The Senator, its staff and other
students at Borah High School make her an excellent choice for Journalism
Educator of the Year. She shows compassion for and trust in her students while
holding them to high ethical and performance standards. Year after year, her journalism
students tackle tough subjects and produce a school paper of consistently high
quality. They also maintain a solid online presence. Her work with her students
would be enough to warrant this honor, but Ms. Harmon goes beyond the classroom
and is actively involved in the Journalism Education Association, ensuring that
she stays on the cutting edge of her profession. This and other outreach in the
journalism education world makes her a leader in the field and an incredible
source of support not only for her young journalists but for other teachers as
well.
FINALIST:
Justin Raisner, The Highlander, Carlmont
High School, Belmont, CA
Special
Recognition: Yannick Florest, Supervising School Aide, Beginning with Children
Charter School, Brooklyn NY
FRANK KEEGAN “TAKE NO PRISONERS”
AWARD FOR NEWS

WINNER:
Emily Muñoz,
“Academic Dishonesty,” Pflugerville High School, Pflugerville, TX
Emily’s in-depth and hard-hitting
story about rampant cheating in her Texas high school pulled no punches. She
snagged interviews not only with teachers who had a range of views on academic
dishonesty, but with students, including one who admitted to cheating. She
didn’t stop at the high school door, but pursued university officials and
college students at two Texas universities. Going that extra distance served
her high school readers. Her story educated them about how differently cheating
is viewed and handled at the college level compared to what they see in their
high school. Emily’s story represents the kind of tough journalism espoused by Frank Keegan, for whom this award is named. 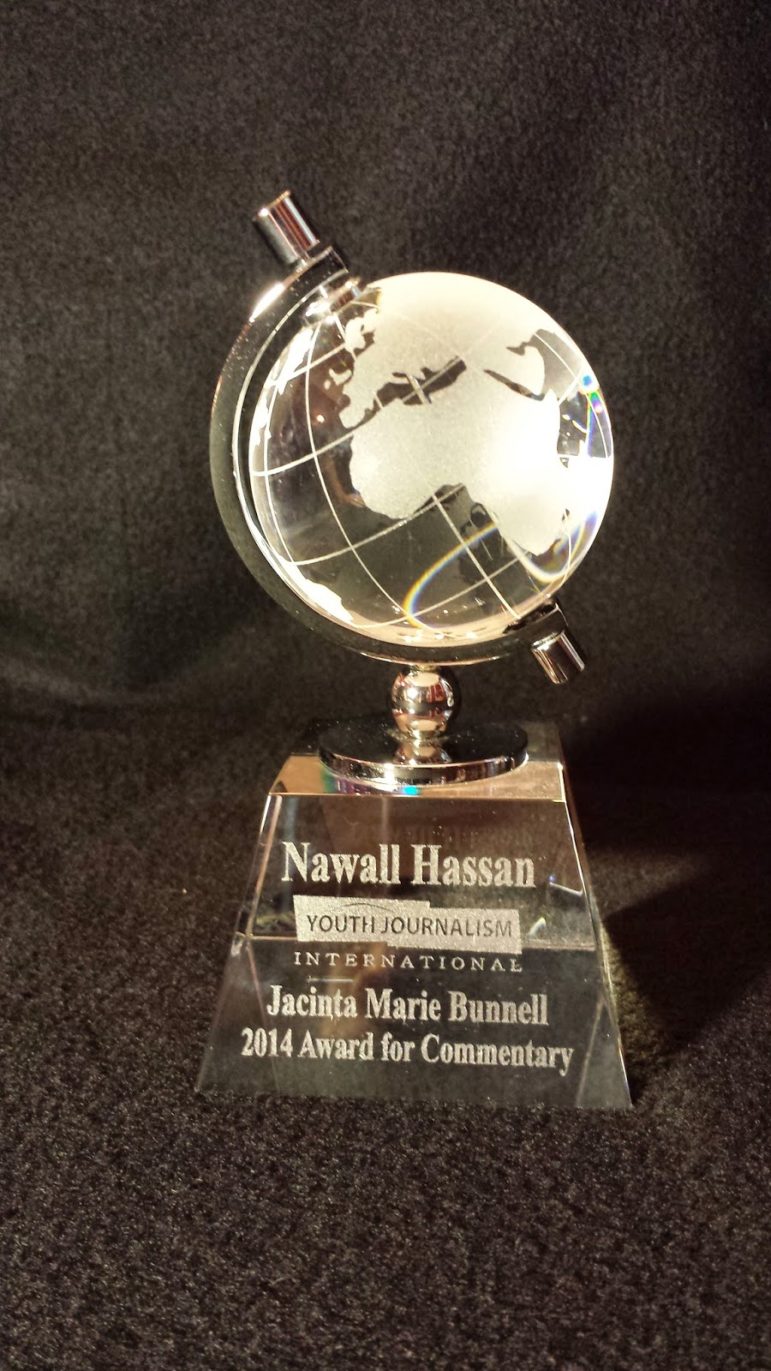 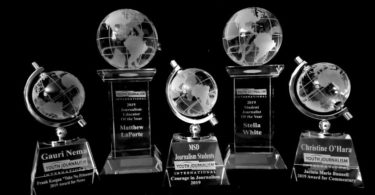