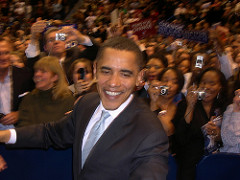 Genoa, ITALY – I’ve been asking my friends about the U.S. presidential election for ages, and all this time, they’ve given just one name as an answer: Barack Obama.

The reasons they gave me for standing on the Democratic candidate’s side were many, but I can basically summarize them in one word: change.

Obama is not just giving promises – he has been able to ask people to believe.
In the maxim, “Yes we can,” people get really involved. “We” becomes “us.” We can change, if we all want to.

When you see Obama speaking, first of all you see a man. You see a man who is trying to have contact with the people he is talking to, a man who really wants change and needs your help.

As an Italian, I am not directly involved in the American presidential election. I can’t vote for Obama, but I can feel that all around the world we need what he represents: novelty, change and hope.

We are tired of being represented by people who always give promises and never perform them. We want stability for our future in a world that does not guarantee this at all.

Someone may say Obama is not the solution.

Maybe not, but he may be the start.

Eugenia Durante is a Junior Reporter from Italy for Youth Journalism International.