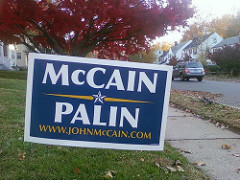 “A vote is like a rifle: its usefulness depends upon the character of the user.” – Theodore Roosevelt.

It is also an important election because the economy is in trouble and it is crucial that we choose the candidate that will best help our economic situation.

“Who are you going to vote for?”

This question has been coming up a lot recently. Though I am a high school senior, I will not be old enough to vote in the coming election, but this has been a hot topic in many conversations with my classmates.

Even though I will not be able to vote, I do have my opinions on this election. Many people seem to take the privilege of voting for granted. I have been disappointed by some of things that I have heard some of my classmates say.

The other day I overheard a student say, “I’m voting for Obama, because McCain looks like a rat.”

I asked him if he seriously thought that was a justifiable reason to vote for the candidate, and he simply said, “Yes.” He didn’t know anything about McCain – he just didn’t like what he looked like.

He didn’t have much more knowledge of Obama’s views, and this was the candidate he said would get his vote. The one thing he did know was one of Obama’s energy plans, but he even had those facts wrong. He said that under Obama’s plan, everyone would have a hybrid car in 10 years.

In reality, Obama’s plan calls for a million hybrid cars on the road by 2015. This proves that you need to research each candidate, and don’t go by just word of mouth.

Another bizarre thing I heard a students say was, “I am voting for McCain, because Obama is the Anti-Christ.”

I am not bashing religious views, but isn’t that judgment of a person? There is no reason to make such accusations, and there is even less reason to vote for another candidate just because a rumor like “Obama is the Anti-Christ” is going around.

I have also heard, “I’m going to vote for Obama, because he has charisma.” Charisma is good, but it’s not everything. Voting for someone just because they have charisma makes the presidential elections sound like a silly homecoming election.

Voters should learn as much as they can about each candidate, and vote according to whose views they like the best; if the candidate happens to have charisma, that’s just an added bonus.

These are, obviously, not good reasons to vote or not vote for a candidate. Does it really matter what the president looks like? Is charisma more important than the issues that the candidates are for or against?

Young voters need to learn the views and beliefs of the candidates. They do not need to go off of rumors or word of mouth alone.

I believe that more focus should be put on educating young voters on the candidates. Their votes count, and I do not believe that all of them know enough to choose a candidate properly.

Sarah Heath is a Junior Reporter from Tennessee for Youth Journalism International.