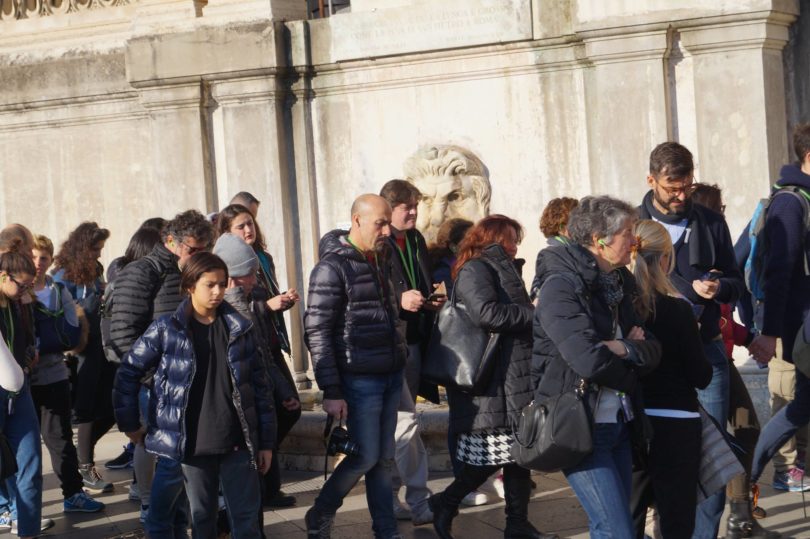 Rome, ITALY – Italy’s March elections mark the start of a new, unpredictable political era for the country, all because of the youth vote.
First-time voters who grew up during Italy’s economic crisis – the longest experienced by any Western country – arrived en masse at the polls feeling abandoned, detached and disaffected.
A mere 11 percent of Italy’s population, they may have changed Italy’s future entirely.
In a nutshell, these are the election results: Movimento 5 Stelle (5 Star Movement), a new and inexperienced party, received most of the votes, 32 percent. They were closely followed by the center-left party, the Partito Democratico, which ran the country for the last four years and collected 18 percent of the vote. The divided center-right coalition, formed by three moderate and extreme right parties, won the remaining 35 percent of the votes.
Not surprisingly, most of the youth votes went to the new party: the M5s, which was founded in 2009 by an eccentric, visionary comedian named Beppe Grillo.
From the start, the M5s was anti-establishment and innovative: it promoted itself almost exclusively online and through social media and its first gatherings (the so-called “Fuck Off Days”) were held in protest against the inefficiencies of Italian politics. M5 specifically targeted the overwhelming part of Italy’s politically disaffected population which, naturally, also includes the youth.
The M5s political agenda wants to overturn the status quo, cut privileges, provide financial aid to the needy, kick out the octogenarians in power and open the door to the younger generations.
The M5s is now led by Luigi Di Maio who is 31.
“Finally, here is a party that has politicians that don’t look like my grandparents! I feel I can relate to them if nothing else because they are younger and see the world more like I do,” said Marco Iorio, a 17-year-old Roman who attends the Italian public high school Cornelio Tacito.
Specifically, the 5 Star Movement catalyzed the youth vote on three issues that worry the young the most: the economy, the European Union, and immigration.
The economic crisis in Italy started at the beginning of the millennium and reached its climax in 2008. It has only recently subsided. These difficult years had a devastating, direct effect on today’s first-time voters.
According to the international Organisation for Economic Co-operation and Development, Italy has the highest percentage of NEET (not in education, not in employment) in Europe among those aged 15-24: as high as 20 percent nation-wide and 30 percent in the south.
This generation has only known economic stagnation and a deep feeling of unease and disaffection.
“Italy is a country divided in two: the south has it much worse than the north,” said Isabella Rossi, a senior studying in Rome. “Between the mafia, the unemployment and the corruption, growing up in the south makes you automatically disadvantaged. There are all kinds of movies about what it’s like being in the south: it’s beautiful but nothing works.”
As a recent OECD study shows that every year the number of young, unsure voters increases. Unsure voters cast their votes for a party they thought would result in the least amount of damage, namely the M5s, the new, inexperienced party.
Coincidentally, this generation was also the first to be introduced to the euro, which some see as a cause of the recession. Not surprisingly, not only do the youth want to abandon the euro, they also want to leave the EU altogether and that is why the young voted for the M5s, the most Euro-skeptical party in Italy.
The M5s party attracted the youth vote of the south. The reason is simple: Immigration. Because of its geographic location between north Africa and Europe, immigration in Italy has drastically increased over the years and seems unstoppable.
Many Italians feel immigrants have taken away thousands of jobs, especially from the nation’s young. The most affected area is Italy’s south, a poor and backward area that is rife with corruption and dominated by the working class.
“The arrival of under-qualified immigrants is a primary threat to the lowest social classes and to the unemployed and uneducated youth. In the south, youth’s greatest desire is for an anti-establishment party, just like the M5s, which promises to close the borders to illegal immigrants,” said Lorenzo Balducci, 17, of Rome.
Balducci said immigrants need jobs, but there may not be enough for everyone.
“I am not a racist, but I think that just letting in waves of immigrants without taking care of them is wrong, for us and for them,” Balducci said. “What are they supposed to do when they arrive here and they don’t have a job, don’t know Italian, are not helped to get integrated? They expect a better life but they will never achieve it here. There are few jobs in Italy. Who has a right to have them, Italians or immigrants?”
Although it won more votes than any other party, the M5s lacks the majority. That means it has to form a coalition. Who will the M5s ally itself with? Recent reports point to the Lega, the extreme right, defiantly xenophobic, anti-immigration, anti-Europe, anti-euro, anti-Nato party. These are all ideas close to the heart of the young.
“I feel in tune with people of my age in European countries and I love to travel throughout Europe, but I don’t see the need for the EU. What does it do and how does it help us?” asked Maria della Ratta, 20, an architecture student at Rome’s La Sapienza University.
It remains to be seen whether the youth vote will encourage an alliance which will bring the country one step closer to Fascism or if the coalition will steer to the center and help Italy, and, more importantly, its abandoned youth.

Maria Dirce Rebecchini is a Reporter with Youth Journalism International from Rome.