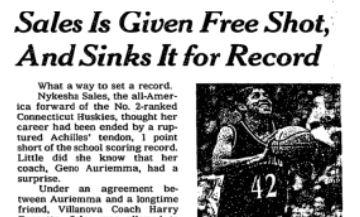 BRISTOL, Connecticut, U.S.A. — Like everyone else, local students and coaches disagree sharply about whether University of Connecticut basketball star Nykesha Sales should have been given a free shot to break the team’s all-time scoring record recently.

Sales injured her Achilles’ tendon with one game left in the season — when she was a point shy of the record that everybody thought she’d break easily.

Facing surgery, Sales appeared to have no hope of pushing past Kerry Bascom to capture the school’s scoring record.

But coach Geno Auremmia cut a deal with his counterpart at Villanova, the Huskies’ opponent in the last regular season match-up, to let Sales shoot an uncontested lay-up to start the game. With that basket, Sales moved into the top spot, with Bascom’s blessing.

The move set off a firestorm of debate across the country and around the world.

So what’s the problem with giving Sales a freebie to cap a tremendous career?

The coach of Eastern’s girls’ varsity basketball team, Tony Floyd, said, “The only ones that complain about this is mostly guys.”

“She shouldn’t have got it,” said Eastern freshman and junior varsity basketball player, Billy Emmert. “Injuries are a part of basketball,” he said.

“It’s right,” he said. Phelan said he would accept a shot like the one Sales’ took.

J.P. Sullivan, who also plays Eastern freshman basketball, added that Sales “was a big contribution to the team.”

Most women interviewed were on Sales’ side.

Getz said if she were in Sales’ position, she would have done the same thing.

Donna Hamzy, who plays for Eastern’s freshman and junior varsity basketball teams, said that if she were in Sales’ shoes “I think it would be real depressing if I didn’t get that” last basket.

“Personally, I think she shouldn’t have got the shot,” Gridacucco said.

Many Bristol high school coaches agree with Auriemma’s decision to help Sales over the top.

“I don’t see it affecting anything in women’s sports,” said Floyd. “It’s been around in men’s sports for years. It’s just catching up, that’s all. Your’re just used to guys doing it all the time.”

Ryan said that if he were in Auriemma’s shoes, “I would have done it right away.”

The boys’ varsity soccer coach at Eastern, Michael Greene, said Auriemma “did what he thought was right. He did it from the heart.”

“I feel bad for Sales. People who don’t know her will always think of her as the person who was the record-scorer,” says Greene.

Hila Yosafi is a Reporter for Youth Journalism International. Collin Seguin, another YJI reporter, contributed to this story.