BRISTOL, Connecticut, U.S.A. — The Connecticut Bicycle Exchange is known for being a place that sells mountain bikes and skateboards, but more importantly to its patrons, it is known as a place where they can skate freely without fear of being harassed. 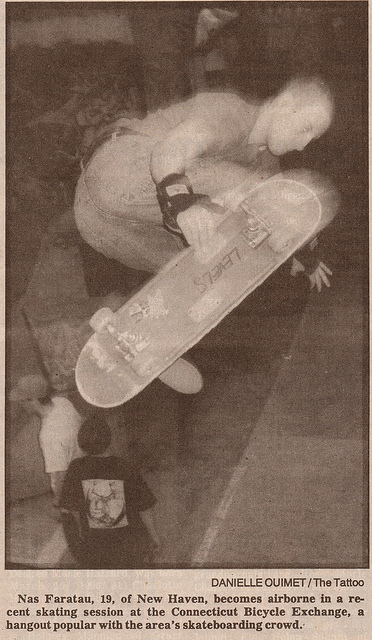 All over the country, skateboarders get kicked out of public and private places for skating.

In fact, in Bristol, skating in public places such as sidewalks or streets and private places such as parking lots, is considered a crime, city police said.

While skating in general is not considered illegal activity, if you are founding skating in these areas, you will be accused of loitering or asked to leave.

While these are legitimate concerns, it leaves skaters without a place to go.

That’s where Connecticut Bicycle Exchange — known to skaters as CT — enters the picture.

The skate park at CT is one of the only places in the state that gives skaters the opportunity to skate legally.

The park, open Thursdays through Sundays, routinely draws people from all over the state. Skaters range from elementary school-age students to those as old as 25.

Crowds can number as many as 60 a night.

The skate park provides several ramps, including the largest ramp — the half pipe — used for skating tricks and stunts.

The rest of the area provides plenty of room for street skating.

That it’s an indoor facility is an added bonus. Because snow and ice on streets and sidewalks curb outdoor skating, many fans enjoy their sport inside during the winter months.

But most of all, CT provides a place for skaters to do what they love most.

Put best by a skater himself, Simon Stowe, 19, of West Hartford, said, “It’s cool for us to have a place to go to practice and just have fun with our friends without being harassed.”