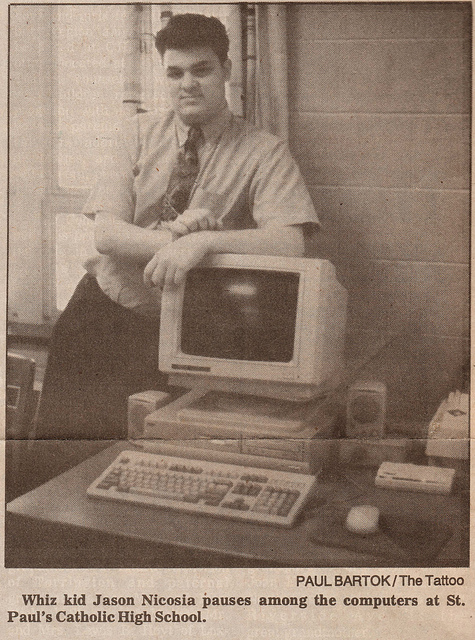 Bristol, Connecticut, U.S.A. — What do you do when you get out of school each afternoon?

Some high school students participate in extracurricular activities. Others may go get a job.

Jason Nicosia, a sophomore at St. Paul Catholic High School, does something most people would not expect a 16-year-old to do. When Nicosia gets home, he builds computers and entertains computer clients.

Nicosia works for his father at The General Data Co., a family-run business which deals with everyday people who wish to buy a computer.

“I used to watch my father when I was young and would go and do it myself,” Nicosia said.

Though mostly self-taught, he also said that he went to educational workshops. Soon, he began making and repairing computers on his own.

Now he is so well educated that he teaches at seminars on computer education for adults.

He knows four computer languages and can write two of them.

Nicosia travels throughout the state making repairs for various customers. At home, he builds computers with the newest technology, but at more reasonable prices.

He has also written his own programs.

“If I had more time, I wish to publish them,” he said.

Nicosia spends 40 to 50 hours in the office per week and an additional 20 hours of service duty.

“With so many hours dedicated to my job, all my social life is sacrificed,” he said.

Nicosia must give up going to almost all school activities.

Despite the amount of time Nicosia gives to his job, he said his grades are not affected and he is able to keep up.

People are always shocked when they find out his age.

“Once when I went to repair a computer, people thought I was going to play games on it,” Nicosia said.

Students and teachers at St. Paul’s are amazed. Teachers at other schools are often afraid that his age will hamper his ability to fix their computers, hesaid.

Many people that Nicosia runs into ask to see an identification card.

Nicosia plans to go to college and get a degree in computer science.

He said he hopes to expand the family business into a store outside of his home.

Nicosia said he also wants to do some light international work.

“My only regret is not starting sooner,” he said.