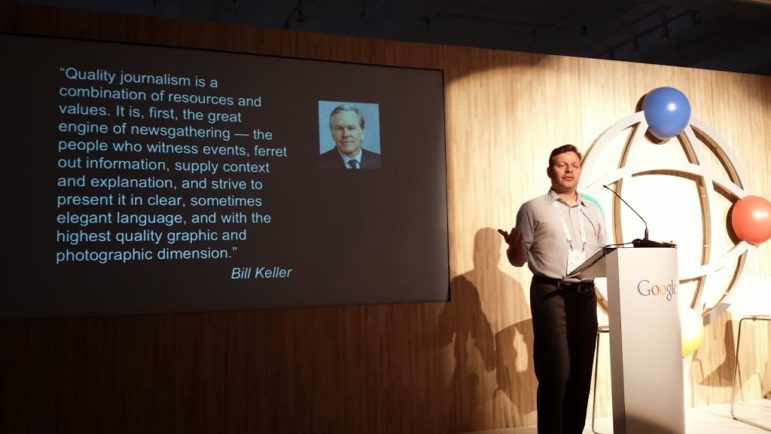 NEW YORK CITY, N.Y., U.S.A. – Ordinary data can be presented in a more interesting, visual way on a map or graph by using a new Google Drive application called Fusion.

Journalists got a lesson on the application, which is still in the testing stage, and how to utilize it in their work at the Google for Media Summit Monday in Manhattan.
Anyone who wants to share their data on a map can now do so with relative ease by using Fusion, according to Vanessa Schneider, Geo Media Program Manager for Google. At the media summit, Schneider led a workshop on creating custom maps using Google Fusion Tables.

Fusion combines spreadsheets with the familiar Google Maps technology and database to generate unique maps for each data set.
In the workshop, participants used Google Fusion to map insects in Costa Rica and to add color-coded gradients to show the number of workplace deaths in varying U.S. states.
With various customizable features and complementary tools, journalists and others can use these visuals to engage their audience and enhance user experience.
Using Fusion, people can upload a spreadsheet with a location in one column and other pieces of information in other columns. Fusion then creates a map with points at the specified locations. Users can add tabs with information associated with each particular place.
When collecting information for Fusion on a spreadsheet, for example, there could be columns with latitudes and longitudes or just the names of cities. In other columns, users could put in any kind of information associated with those locations that they need for their company, news story or research.
Fusion then creates an organized, interactive array of information from what had been just writing in a spreadsheet.
With more people accessing news through mobile devices, it’s becomingly increasingly more important for journalists to take advantage of technological tools like Google Fusion in order to keep their viewers’ attention. Visuals like maps help add to the audience’s understanding of a story.
“Journalism still matters,” said Daniel Sieberg, who is head of outreach for Google for Media. He said Fusion tables can help represent data effectively in a visual way.
At Google’s Media Summit, presenters from The New York Times, ABC News, and Time joined Google executives in talking about new tools journalists can use as well as other innovations that can help them tell stories.
Mary Majerus-Collins, Yelena Samofalova and Mugdha Gurram are Reporters for Youth Journalism International.