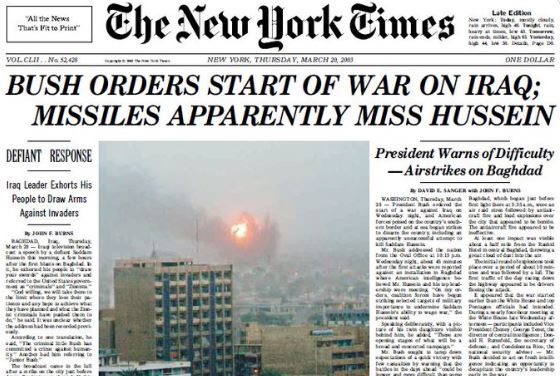 BRISTOL, Connecticut, U.S.A. — To protest the war in Iraq, about 30 students walked out of Bristol Central High School Thursday.
Holding anti-war signs — including “No blood for oil” and “Give Peace a Chance” — the students gathered in front of the school after lunch on the first day of the American invasion of Iraq.
They yelled anti-war slogans and talked among themselves near the flagpole, the place that students agreed to meet outside.
“I think the war is dumb and pointless and it’s a waste of time,” said 15-year-old Jeff Paquette, a Central freshman who joined the protest.
Another protester, 18-year-old Lindsey Cannata, said, “I don’t think the war is good because it ruins a lot of things and we should just get along.”
Several school officials came out after about 10 minutes, including Spanish teacher Frances Nickeson and Assistant Principal Martin Semmel. Nickeson began talking to the students and told them that she, too, opposed the war in Iraq.
“I am very against this war,” she said.
“I just saw them and thought ‘not here, not now,’” Nickeson said.
She told the students, “This is the first day, can we just hold it?”
“It’s hurtful for people who have relatives on the battlefield,” she said.
Nickeson also mentioned the way her husband, a Vietnam War veteran, was treated when he returned home from Southeast Asia more than 30 years ago. “The reception didn’t do him any good,” she said.
She said if students do protest the Iraqi war, the time and place should be right.
Semmel said he understood why students were against the war but questioned the timing because classes were going on.
A couple of students swore and others tried to talk to him about how horrible the war is.
Then Semmel said that if students got back to class immediately, they wouldn’t face any consequences.
About half the students who were protesting went back inside and returned to their final class of the day.
Some who stayed behind booed those who departed.
Those who remained stood on the sidewalk beside Wolcott Street and held signs saying “Honk For Peace” and sought to get drivers passing by to lean on their horns, according to students who were there.
Semmel went back out and convinced the students to go back inside, where they were given passes to return to class.
“We shouldn’t get in trouble because we are Americans and we want peace,” said Jill Rancourt, one of the student protesters.

Danielle Letourneau is a Reporter for Youth Journalism International. This story was also published in The Bristol Press on March 21, 2003.