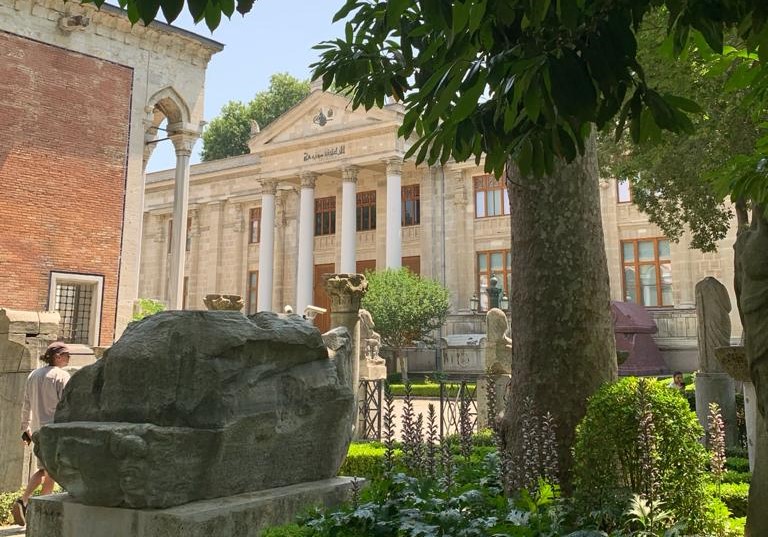 ISTANBUL – Istanbul Archaeological Museums, the apple of Istanbul’s eye, houses countless priceless objects that represent almost all of the eras and civilizations in world history.

It is also the “First Turkish Museum.”

On a visit during Youth Journalism International’s Global Conference this summer, the museum completely consumed me, even though I had been there before.

The building has an essence of importance, and it is an incredibly significant part of Turkish culture.

It was wonderful to see the museum has been restored without going against its original style.

The renovated Istanbul Archeology Museum feels like a modern art gallery rather than a “boring” museum.

It enables us to engage with statues in a way that’s close and so experiential, rather than just reading about it essentially in history books.

Every piece of art on display embodies various ethnic origins. The room just for medallions is the perfect example. Imagine showcases full of Roman, Greek, Anatolian, and Byzantine medallions in separate corners in the same huge room. Isn’t it mind blowing?

In the room where there was information about the old gods and their illustrations, the Greek gods and the ancient Anatolian gods were laid crosswise for the history lovers of ancient gods.

In dazzling displays, exhibits presented sarcophagi and other valuable items from different periods from all over Anatolia, as well as statues of mythological heroes and emperors.

Notably the sculptures and finds brought from ancient cities in different parts of Anatolia – the part of Türkiye that is on the Asian continent – are divided into groups according to their periods.

That shows it is well run and uses its massive collection for an effective visitor experience.

Technical aspects of the museum

Since the showcases in the museum are not deep, the objects are easily examined, down to their details. The lighting of museum objects is well done and allows for great pictures even with the worst camera.

Many displays are out in the open, so visitors can see the items from every angle.

The presentation of the museum exhibits is something else that I found original and helpful. Simple, easy-to-understand explanations of items on display were listed nearby. A number system matched the item in the showcase to the description.

The museum is actually a complex of three buildings. One is the Archaeology Museum, another is the Museum of the Ancient Orient and the third is the Tiled Kiosk Museum.

The beautiful blue-colored Tiled Kiosk Museum is a highlight. It’s one of the kiosks that Fatih Sultan Mehmet, an early conqueror of the city, had built.

Sadly, there are no examples of pieces that were used by Ottoman sultans. Instead, collections of Turkish tiles and ceramics from the 11th to the 20th centuries are on display.

The Tiled Kiosk itself is actually a masterpiece. The entrance is decorated with mosaic tiles, which makes it impossible not to adore. When you take your first step inside, the things you see inside the six rooms and the middle salon of the kiosk museum are plentiful examples of Turkish tiles and ceramics from the Selcuk and Ottoman periods.

When we entered one of the six rooms, my fellow Youth Journalism International student Tanya Tkachenko from Ukraine said the rooms were too large for the few findings. As much as I think the building is magnificent, I agree with her.

All in all, the three buildings included coins and fancy jewels, crowns, columns and statues from ancient times.

I am more than glad to have had a visit to the famous Istanbul Archeological Museums with my dear friends and share the appreciation of the beauty of history at this conference together.