ASBURY PARK, N.J. – What started as some overheard gossip from nearby beach sitters, turned into my knowledge of one of the biggest earthquakes in recorded history on the East Coast.

It was a lazy beach day at Asbury Park where we were vacationing with my dad’s side of the family — but wait; maybe I am getting ahead of myself here.

I was shivering in a beach chair at about 1:00 in the afternoon. Having just exited the ocean, I was cold and determined not to go back in the freezing, lifeless water. I watched my father and his 83-year-old father playing like children in the vast ocean. I suppose that a miniscule part of me was jealous, but I was mostly contemplating how to reach a magazine without the towel slipping to expose my goose bumped arms.

Since this is simply writing on paper, as apposed to life in action, I will fast-forward 45 minutes.

At about 1:45, I got up, with the towel still wrapped tightly around me, and walked to the restroom. There was a long line, so I had to wait until around 1:50 to finally get my turn.

When I arrived back to the beach, I began to catch curious snippets of conversation from the people around me; “I felt it,” “Shaking,” “Virginia?” Maybe I was too cold to care, but whatever the reason, I didn’t bother to inquire. Instead, I sat down to read my magazine.

About two minutes later, I was woken from my movie star magazine trance by my Nana.

“Elizabeth,” she said to my mother “Those people over there said there is an earthquake in Virginia!”

Whenever my Nana gets excited, her voice gets higher and higher. By now, she sounded like a dog whistle.

My mother, whose mother lives in a nursing home in Virginia, immediately began to panic. She grabbed the phone with extreme vigor and began to try and reach her mother.

As my mom walked around the hot sand, desperate to get a signal, I picked up bits and pieces of what I had missed while in the bathroom.

My Nana continued to fill me in on what had happened. She seemed very proud that she now finally had a story to tell. “We felt it too! My chair started going like this,” she made a shaking movement with her wrist “I thought a big truck had gone by! Those people over there said there was an earthquake,”

Without waiting for Nana to continue, I ran over to “those people over there.”

“Was there really an earthquake in Virginia?” I blurted out.

“That’s what the news is saying,” said a middle-aged woman with a dramatic beach tan.

Her pale, adolescent son was on his phone trying to search for more information. Suddenly, he jumped up and began talking so fast, I could only retrieve bits of what he was saying; “Evacuating…Pentagon…White House…Capitol Building…New York…leaving building…earthquake…near Charlottesville.” He finally sat down looking like he had just run a marathon.

“I got it! My radio is working,” shouted a woman nearby. Everyone crowded around to see if his or her loved ones were safe.

I looked around the scene with pride. For me, this was more than an earthquake; this was a strong bond with total strangers. A bond between me, a pale hyper boy, his beach tanned mother, and the woman with the radio. I may never know their names, but I know this for sure, that bond can never be broken.

Emma Bally is a Junior Reporter for Youth Journalism International 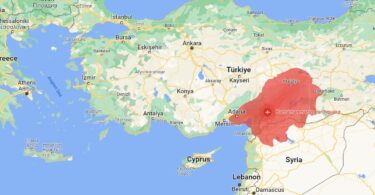 Emma Bally is a Senior Reporter for Youth Journalism International.