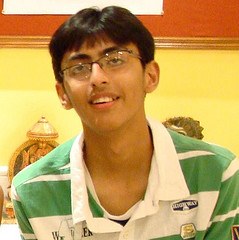 Puneet Kapoor, 16, of Uttar Pradesh, India. Puneet is a student at the Sunbeam English School in Varanasi, Uttar Pradesh. (YJI)

Youth Journalism International reporters in eight countries talked to more than 30 young people on five continents to find out what the election of Barack Obama might mean for them, their nation, the world and the future. Read this special report — the largest we’ve ever undertaken — to find out what they had to say on the eve of Obama’s Inauguration as president of the United States.

Teens across the world may not be buying houses and saving for retirement just yet, but many said the current economic crisis is a more pressing issue than the war in Iraq for incoming President-elect Barack Obama.

When asked what the most important issue of the recent election was, 15-year-old Ray Ma of Columbia, South Carolina said, “Definitely the economy. Obama basically won over Americans on that issue. Now, having won the election, expectations are extremely high.”

“It seems like the issue on the war of Iraq has taken a back seat,” Ma said, “for now.”

But the war has damaged the economy, and Obama will have to deal with that, said Cyrilla Mulindi, a 19-year-old Kenyan living in South Africa who attends Clarendon High School for Girls in East London.

Jessi Humberd, a senior at Rhea County High School in Spring City, Tennessee, said Obama’s policy on the war may help the economy.

“I think it will help our financial crisis, because we won’t be spending money in Iraq,” said Humberd.

More than 30 young people interviewed in eight states in the United States and seven other countries across the world by reporters for Youth Journalism International agreed that the global economic crisis was a significant factor in the recent presidential election and that it needs to be addressed as soon as possible.

“I think the economic crisis is the most important and immediate issue to be faced. If the crisis won’t be solved soon, the world economy will crack with catastrophic consequences for everybody,” said 18-year old Luca Capizzi, a student at Liceo Classico Mazzini in Genoa, Italy.

“I think the markets will rise up for a short period of time, but I doubt it will last. Obama’s liberal economic policies will backfire on him, especially when he increases government spending and enacts his healthcare plans,” said Ma.

Many young people interviewed outside the U.S. are optimistic that Obama will be able to handle the economy successfully.

“I trust in Obama to solve this crisis,” said 17-year-old Alice Cordara, also a student at Liceo Classico Mazzini in Genoa, Italy.

Puneet Kapoor, a 16-year old student of Sunbeam English School in Varanasi, Uttar Pradesh, India spoke of what effect a possible economic upturn would have on India and surrounding countries. Kapoor said stable American banks would mean more investors in other countries and allow for “growth in their markets as well.”

Some international students trust in Obama’s campaign promises of change. “Hopefully, he’ll bring in a different set of opinions and ideas,” said Paul Harris, a 17-year-old of Ballarat, Victoria, Australia.

Thirteen-year-old Elan Green, a student at Alder Creek Middle School in Milwaukie, Oregon, said he thinks Obama will be able to change and help the economy.

But other youth are not convinced that Obama will be successful in reforming the American economic system.

“Barack plans on attempting to reduce the United States national debt, but hasn’t provided a concrete plan for doing so. He hasn’t really given the American people anything substantial on global economic issues,” said 16-year-old Katie Mullaney, a student at Agape Academy in Hopkinton, Massachusetts.

Tyler Steinhorse, a 16-year-old junior at Ironwood Ridge High School in Tucson, Arizona, said Obama’s impact on the global economic crisis will be to “make it worse, way worse.”

Mullaney said Obama’s plan for the economy is a partisan issue and doubts his ability to address the problem on a global scale.

Tyler Cruver, a junior at Rhea County High School in Dayton, Tennessee also looked at Obama’s plans for the economy from a partisan point of view. He thought Obama would increase the national debt when trying to alleviate America’s financial stresses.

“Democrats have always been good in helping the economy, but they are loose in their spending,” said Cruver. “I think Obama will fix it for the present, but make it more difficult for the future.”

Some teens said merely electing Obama won’t have a significant impact on the economy.

“The election itself won’t have any effect on the crisis, because he is after all just a man – it’s how he deals with it that will see if it will go better or worse,” said Christian Reinhard Müller, a 19-year-old from East London, South Africa.

Capizzi also said Obama is not solely responsible for solving the economic problem.

“President Obama must be an extraordinary man to solve this financial crisis,” said Capizzi. “It’s not the president that needs to be changed, but the system. I don’t know how the things will go.”

Interviewed in Kabul, Afghanistan, Saeed Haris, a 24-year-old undergraduate student at the American University of Afghanistan, said Obama must first face the financial crisis, but also work to repair damage to America’s image.

Rebecca Au, a 14-year-old sophomore at Owl Academy in Highland Park, New Jersey, said she hopes the financial crisis will resolve on its own.

Many young people think it is still too early to forecast the economic outcome of Obama’s election.

Ugandan Nolitha Namatovu Luzuka, an 18-year-old South African citizen and a senior at the Clarendon High School for Girls in East London, South Africa, said the economic impact of an Obama presidency is “difficult to predict.”

“His plans regarding taxes will alleviate the problems of the poor and that can hopefully set a trend,” Luzuka said.

A few young people, inside the U.S. and abroad, listed other issues ahead of the economy – winning over those who didn’t support him, keeping his promises and bringing real change, not raising taxes and taking care of the war.

“I think that first of all he will have to try to convince McCain’s supporters that he is their president, too,” said Alessia Ubaldini, 18, a high school senior at Liceo Classico Mazzini in Genoa, Italy.

“He should try not to break dialogue, but to continue to involve people as he did during his campaign.”

New voter Nicole Matthews of Queens, New York, agreed it was too early to say what impact Obama will have on the financial system.

Based on Obama’s campaign speeches and debates, Matthews said, his exact plans for stimulating the economy are unclear.

But whatever varying thoughts on the economic crisis and how well equipped Obama is to handle it, the majority of young people interviewed said it is a serious issue that needs to be solved quickly.

“This is something that needs to be dealt with right away before our entire economy collapses,” said Mullaney.