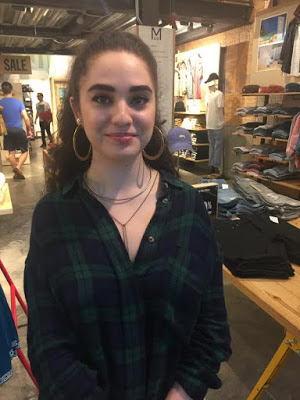 Ashley Hernandez, who works in a clothing store in a Miami mall, reacted to the Sunday morning mass shooting at an Orlando gay nightclub. (Maria Luiza Lago./YJI)
MIAMI, Florida, U.S.A. – Shocked at the mass shooting at Pulse, a popular Orlando gay nightclub early Sunday, two young workers in Miami were also upset how the media was covering the shooting situation.
“At first I didn’t know how to react to the shooting, just because of the fact that the way the news were reporting the story was one-sided,” said Ashley Hernandez, 21.

Early Sunday morning, a gunman opened fire at Pulse, an LGBT nightclub in the heart of Orlando. Fifty people were killed and more than 50 injured in the attack, which President Barack Obama said was “the most deadly shooting in American history.”
In a Sunday afternoon address to the nation, the president called it “an act of terror and an act of hate.” He said federal and local law enforcement are working together on the criminal probe.

“The FBI is appropriately
investigating this as an act of terrorism,” Obama said.
“It felt like they were framing it in a certain way to believe that all terrorist were of a certain group and that all of the people from it should be treated as threats,” Hernandez said.
Nicole Scribner, 23, agreed, saying that most of the news coverage she saw was “targeting” Islam.
“It kind of upsets me a lot because they are perpetuating a lot of hate towards a certain group of people who really don’t have anything to do with it. That was frustrating,” said Scribner.
The women each work at clothing stores in Miami’s Dadeland Mall.
Both Hernandez and Scribner said gun laws could be reinforced in the United States, but they don’t think it would make much difference. They mentioned Chicago, a city with a high crime rate and strict gun laws.
The problem, according to Scribner, is more with the person doing the shooting than with the gun itself.
Hernandez thinks that the problem goes beyond guns. There’s a cultural problem that still needs a lot of work to be resolved, she said, without elaborating.
The New York Times and other news outlets have identified the gunman as Omar Mateen, a 29-year-old U.S. citizen whose parents came from Afghanistan.
According to CNN, Orlando Police Chief John Mina said that the shooter had an assault rifle, a handgun and an unknown amount of ammunition.
Maria Luiza Lago is a Reporter for Youth Journalism International.
***
Your tax-deductible contribution helps students
supported by this non-profit organization. Thank you!
HelpYJI.org