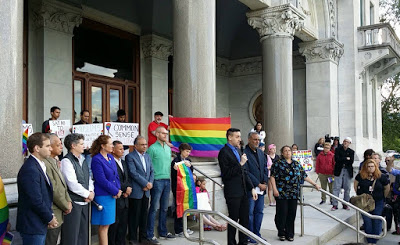 Griffin Downing, a gay Muslim who is an HIV counselor at Hartford Gay & Lesbian Health Collective, spoke at the “Uniting Against Hate” vigil at the Connecticut state Capitol in honor of those killed in a mass shooting at a gay nightclub in Orlando early Sunday morning. Two advocacy groups, True Colors and the American Muslim Peace Initiative, sponsored the vigil. (Kiernan Majerus-Collins/YJI) 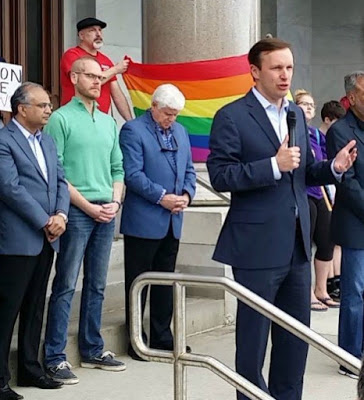 U.S. Sen. Chris Murphy, a Connecticut Democrat who has been a relentless advocate for stronger gun laws, speaks at the vigil. Earlier in the day, Murphy released this statement: “I’m aching for the victims, their loved ones, and the people of Orlando, and I pray that all those injured have a quick and full recovery. I know the pain and sadness that has brought too many communities – Newtown, Oregon, Aurora, San Bernardino, and now Orlando – to their knees, and I can only hope that America’s leaders will do something to prevent another community from being added to the list. This phenomenon of near constant mass shootings happens only in America – nowhere else. Congress has become complicit in these murders by its total, unconscionable deafening silence. This doesn’t have to happen, but this epidemic will continue without end if Congress continues to sit on its hands and do nothing – again.” (Kiernan Majerus-Collins/YJI) 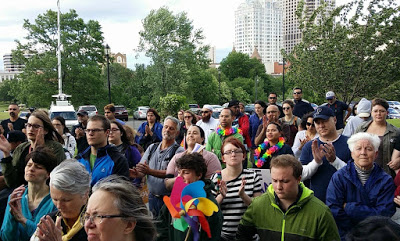 Hundreds of people gathered for the vigil on the state Capitol grounds Sunday evening in Hartford. (Kiernan Majerus-Collins/YJI) 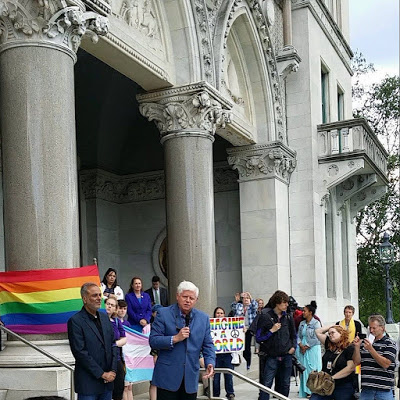 U.S. Rep. John Larson, a Connecticut Democrat who favors stronger gun laws, speaks at the vigil. In a statement released earlier Sunday, Larson said, “My heart goes out to the victims and their families in Orlando. In Connecticut especially, we know far too well the heartbreak and shock that accompanies a tragedy like this.  Minimally, Congress should take a vote on universal background checks. We owe that to the public. Whether you agree or disagree that all gun purchases should require a background check, it is our responsibility to vote. It is past time for Congress to take its head out of the sand.” (Kiernan Majerus-Collins/YJI) 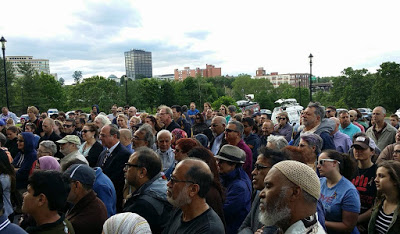 The crowd at the vigil listens to an array of speakers. (Kiernan Majerus-Collins/YJI)

***
Your tax-deductible contribution help students
supported by this non-profit organization. Thank you.
HelpYJI.org