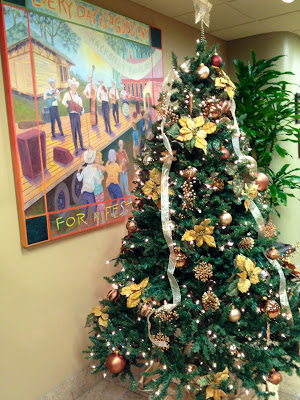 By Kaley Willis
Reporter
Youth Journalism International
SULPHUR,
Louisiana, U.S.A. – Christmas Eve: a time for families all over the world to
come together over a hot turkey, leave some milk and cookies for Santa, and go
to sleep early so they won’t accidentally get a sneak peek of Santa and lose
their gifts.
This is the
standard tradition for most families in America during the Christmas season.
Things in
Louisiana, however, are done a bit differently on December 24th.

Cajuns,
descendants of French-speaking Acadians living mostly in the state of
Louisiana, have many traditions that they incorporate into the holiday season.
It’s a special time for them since it is in preparation of their most famous
celebration, Mardi Gras: the last night of eating rich, traditional Cajun
cuisines before the Lenten season of fasting.
For starters,
the jolly fat man that the world knows and loves takes on a completely
different identity once he hits Cajun country. There is no longer the familiar sleigh-driving,
reindeer-handling Santa Claus, but Papa Noel. While you won’t see a white
Christmas in Louisiana, you will see Papa Noel as he rides over Louisiana in
his alligator-led pirogue, a small boat Cajuns use in the Louisiana marshes.
Rudolph the
Red-Nosed Reindeer is no longer leading the sleigh, but Nicolette the Glowing-Eyed
Alligator, using her illuminated emerald green eyes to guide Papa Noel’s
pirogue throughout the night sky. Another way Cajuns believe Papa Noel is guided
through the Louisiana sky on Christmas Eve is with bonfires in Lutcher, Louisiana
with its Festival of the Bonfires.
At 7 in the
evening, sky-scraping bonfires are lit along the Mississippi River levee and
Christmas celebrations begin to welcome Papa Noel to Cajun country, a tradition
that is said to be started 200 years ago. Many other festivals and celebrations
take place, such as Christmas Under the Oaks Festival in Sulphur, Mistletoe and
Moss in Lake Charles, and Christmas Festival of Lights in Natchitoches, all special
events for locals and tourists to celebrate the holiday season, get some of
their Christmas shopping done, and eat some traditional Cajun cuisine under the
famous oak trees of Louisiana.
There are
hundreds of other traditions, such as eating gumbo for Christmas dinner. The
official dish of Louisiana, gumbo is a strong soup made of roux with seafood,
deer sausage, and other meats. Along with gumbo, dirty rice, okra, pralines,
and turducken, a mixture of turkey, duck, and hen are also devoured at the
dinner table.
Parents also
read The Cajun Night Before Christmas to
their children, a spin on the original story using traditional Cajun lingo, the
first line reading, “T’was the night before Christmas an’ all t’ru de house,
dey don’t a ting pass, not even a mouse.” The spelling of the famous first line
is written by author James Rice in the dialect of Cajun French, and is supposed
to be read aloud in a Cajun accent.
Cajun
gingerbread house making competitions, alligator statues in Santa hats, and
Christmas trees adorned in magnolias, the official state flower, are common
sights you will see during the holiday season in Louisiana.
A combination of
the spicy food, the French language, and the old traditions make a Louisiana
Cajun Christmas one of the most unique and memorable Christmases in the world.
Merry Christmas
everyone, or as Papa Noel says, “Heaux heaux heaux, Joyeux Noël!”