While they
didn’t agree much on who should win, participants probably helped weed out the
field of contenders a bit by throwing so little support to Texas Gov. Rick
Perry and U.S. Rep. Michele Bachmann, both of whom campaigned extensively in
Iowa.
At the top
of the heap were former Massachusetts Gov. Mitt Romney and former U.S. Sen.
Rick Santorum of Pennsylvania. Romney apparently garnered eight votes more than
Santorum statewide but neither man got the support of even one in four voters Tuesday
night. 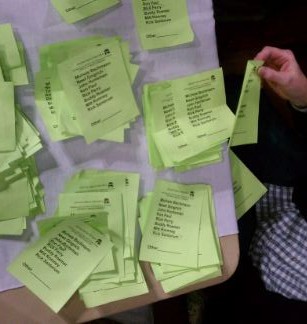 Lizzy
Schmitt, 19, of Waterloo, Iowa, was among those at the University of Northern
Iowa’s Dome, the site of the state’s largest caucus gathering.
“Santorum
has the strongest values,” said Schmitt, who attends the University of St.
Thomas in St. Paul, Minn.
Nick Fisher,
18, a UNI student from Waterloo, supported Romney.
“I like his
policies. I connect with what he says,” said Fisher.  “Either Ron Paul or Mitt Romney will have the
Iowa vote.”
Paul, a
Texas congressman, finished a strong third in the Iowa contest, followed by
former House Speaker Newt Gingrich.
It seemed as
though electability was a major concern for many of the Black Hawk County
Republicans held many precinct-level caucuses under one roof at the UNI-Dome.
Two of the
candidates – Bachmann and Gingrich – spoke to voters at the UNI-Dome to claim a
superior ability to defeat incumbent Democrat Barack Obama in November’s
general election.

Bachmann
said her campaign had the conviction to “defeat Barack Obama and make him a
one-term president.” She compared herself to President Ronald Reagan and
British Prime Minister Margaret Thatcher and said “our nominee needs to be”
like those two outspoken conservatives.

“I am the only
candidate who worked with Ronald Reagan,” said Gingrich, a testament both to
his experience in the U.S. House of Representatives and his advanced age.
Other
candidates sent spokespersons in their stead, choosing to appear elsewhere on
caucus night. Former Massachusetts Gov. Mitt Romney’s spokesman, a local
Republican leader, said that the GOP’s candidate needed “leadership—that’s what
we need in the Oval Office.”

Gingrich
appeared with his wife, Callista. Gingrich didn’t mince his words when talking
about the president he aims to unseat.

“Barack
Obama is so radical and at the same time so incompetent that eight years may
cripple America for several generations,” Gingrich said. “We’ve had three years
of an amateur.”
Bachmann
looked backward rather than forward, telling Iowans to remember the sacrifices
of everyone from the Pilgrims to William Penn. They “literally laid down their
lives as stepping stones” so that we might have religious freedom, the
congresswoman said.

She also
took shots at Obama, saying that he was treating the U.S. like a “third-world
banana republic,” and claimed that Obama coveted “the crown jewel of socialism,
which is socialized medicine.”

One other
presidential candidate visited the UNI-Dome Tuesday—Vern Wuensche, a
businessman from Texas.
“I’m a
business owner, not a politician,” said Wuensche, who is running for the GOP
nomination for the second time. In his first try in 2008, he finished tenth in
Iowa.
Tuesday, he finished behind nine others and
none of the above, but it’s possible he might have placed as high as tenth once
again this time around.
Photographs are by Youth Journalism International Senior Reporter Kiernan Majerus-Collins.Here are the official results from the Iowa Republican Party: