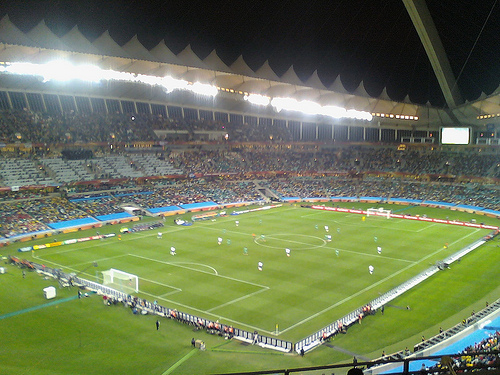 DURBAN, South Africa – Though World Cup matches were playing in my home city, I never expected to be able to actually get inside the stadium to see it for myself.
I’d tried hard to get a ticket to a match, but for South Africans without some great power of authority, trying to score a ticket at the last minute was written off as “Mission Impossible.”
Then on June 14, my uncle presented me with a ticket to see the June 22 match between South Korea and Nigeria. 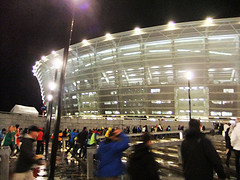 I was literally bursting with excitement, and full of gratitude to my uncle. I couldn’t wait to get to the game.
On our way to the stadium, I gazed around as we drove past cafes and restaurants overflowing with people in their yellow and green South African t-shirts.
I could feel the excitement in the atmosphere as we got closer to the Moses Mabhida Stadium where Nigeria would be taking on South Korea.
When I jumped out of the car, the stadium caught my eye from afar. I suddenly felt like a tourist, taking pictures every second, gazing at its architectural beauty.
It was hard to believe that all this was taking place in my home city.
The sound of vuvuzelas echoed throughout the area, and to my surprise, it wasn’t as loud as it seemed when I watched previous matches on television. People were singing, dancing, laughing and having a good time. It was heartwarming to see such enthusiasm in Durban.
There was a roar amongst the supporters as the teams came out to begin the match. Koreans waved their national flag as Nigerians banged on drums and other musical instruments.
The referee blew his whistle and the two countries went head-to-head in their last opportunity to make it to the next stage of the FIFA World Cup.
As the game went on, one couldn’t help but get caught up in the moment. There was immediate tension throughout the stadium each time a player got near the goalpost, and when Nigeria scored the first goal, the screams and excitement among the supporters reached its highest level.
A memorable moment was the continuous Mexican wave. Eventually it died out in the crowd when South Korea scored its first goal – people probably didn’t want to miss the next goal as they kept watch of the whereabouts of the Mexican wave.
As the match came to an end, I glanced around one last time at the crowd. I knew this was an experience I would live to tell about years from now. When I look back, I can say I was a part of South African history.
I was there.

Nicole Megan Gounder is a Reporter for Youth Journalism International.