WEST HARTFORD, Connecticut, U.S.A. – Thank you, ESPN. You took someone (me) who would have watched maybe two World Cup games – the United States vs. England game and the final – and turned him into a fútbol fan.
Now I know that if you, dear reader, do not live in the United States, you will find my interest in the World Cup rather lame.

Before I started watching the games, I could name a total of three or four players taking to the field in South Africa. Now I can name more than 10.
I couldn’t even tell you who played well in qualifying. Though I don’t really understand why or how teams get into the World Cup, I have a sneaking suspicion that speaking Spanish helps.
Despite all of this, I still feel as though I have a right to call myself a fan. Thanks to ESPN Magazine’s wonderfully informative “2010 World Cup Guide,” I learned that the World Cup is being held in South Africa with 32 teams of which eight – not including the U.S.A. – have a chance to win and that each of them has a strange nickname. And they all have cool uniforms.
Armed with these intriguing tidbits, I set out on my quest to enjoy the World Cup. Unfortunately, due to sad events that were out of my control (mandatory school attendance), I couldn’t watch the first World Cup game, South Africa vs. Mexico. This was unfortunate, because it seems to have been the most high scoring game so far, with each team netting a total of … 1 goal. Really.
However, I came home and went straight to the computer to watch the next game, Uruguay vs. France. I was expecting a really great game because I knew, from my handy dandy World Cup Guide, that both of these teams had won the World Cup before, and Uruguay had won it twice.
They were playing when I turned the game on, and it was 0-0.
I said, “Good, I haven’t missed much.” 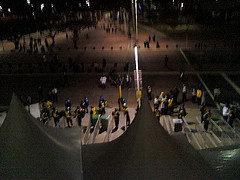 Twenty minutes later it was still 0-0. Thirty-five minutes after that it was STILL 0-0. Ten minutes after that, the game ended. The final score? 0-0.
I then watched some ESPN analysts assess the 0-0 game. I couldn’t understand how a scoreless game could be assessed in as much detail as they did, but it was. So the first day ended with a total of two goals scored in 180 minutes of play.
The pace proved so slack that I nodded off and didn’t wake up for two weeks. I’m talking about my final exams, of course, which prevented me from watching the World Cup.
By the tournament’s 17th day, players managed to score nine goals in just two games.
At this point, it seems as though some very good teams have somehow managed to run themselves right out of the tournament, namely Italy, the defending world champs. I can’t quite understand this. I’ve heard that Italy starts slow, but this year they started so slow that they don’t get a chance to get faster. Italy proved another example of the phenomenon that I’ve dubbed “Old Europeans Getting Slaughtered by People who Speak Spanish” are the French, who, like Italy, appeared in the 2006 title game.
Four years later, neither team wins a game. Maybe it’s their flags.
Vertical’s just not working for them. After careful study, I’ve found that of the 16 flags that made it to the second round, 11 had horizontal stripes and only three had vertical ones. Coincidence? I think not.
In ESPN’s handy dandy “2010 World Cup Guide,” they have a story entitled “The Rise of African Soccer.” Only now they need a story called “The Colossal Collapse Of African Soccer On The World Stage Where The Best Teams In Africa Crash and Burn Almost As Bad As The Europeans And The South Americans Snicker” because that’s exactly what happened.
Out of the six teams that made the World Cup from Africa, a grand total of (insert fanfare here) one made it into the knockout round. That team would be Ghana, which got the honor of playing the U.S. in the first round of the semifinals.
Armed with the secret knowledge that no American cares that much about soccer, the Ghanaians went out and beat those Yanks 2-1 in extra time. The grand old U.S.A. was crushed for a total of about five minutes until Americans realized that there was a baseball game on that night.
This reaction was much different than what occurred in Ghana. Its team’s victory set off a party that may not end for four years.
So, as you can see, Ghana is carrying the torch of African soccer very well so far, and will continue to do so until they have to play a team that speaks Spanish.
Oh, wait, that would be its next game, against Uruguay. Bye-bye, Ghana.

Kiernan Majerus-Collins is a Senior Reporter for Youth Journalism International. The photographs were taken by YJI’s Nicole Megan Gounder in Durban, South Africa.