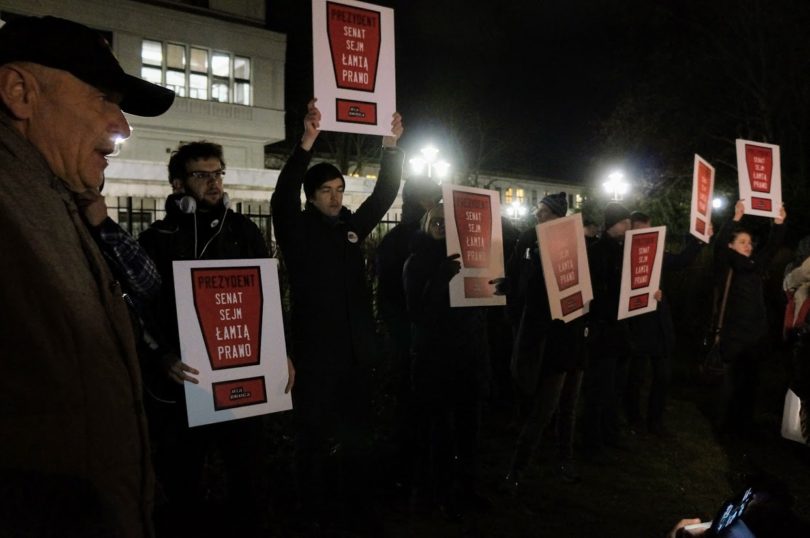 WARSAW, Poland – On the streets of Warsaw a couple weeks ago, I walked down Gornoslaska Street to the famous footbridge that arches over the road.

It was just a day before the 28th anniversary of democracy returning to Poland, and I was on my way to the Wiejska 6 building. 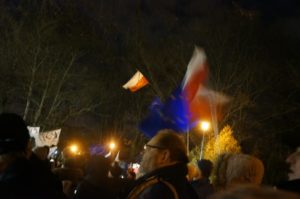 Wiejska 6, Warsaw. The name of the street literally means “Rural,” which makes me giggle every time I hear it. A second later my face turned serious and my heart felt heavy like I had a rock in my chest.
Why?
Wiejska 6 is the address of the Senate of Poland, the place where the upper house of the Polish parliament meets to pass bills and legislatives. It’s the place where in July tens of thousands of people gathered to protest against politicizing Polish courts.
In that place, on December 15, Polish Senators were debating legislation that would give the ruling party control over our courts and the key judiciary body, the Supreme Court.
If adopted, it would mean that the ruling party would decide who goes to jail and who does not and nothing could stop them from imprisoning anyone who speaks against them.
Before you say anything: yes, it is a violation of the law.
The proposed legislation is unconstitutional and incongruous with separation of powers.
The Senate debated and passed a similar proposal in July earlier this year, but the Polish President Andrzej Duda used his presidential superpower and vetoed it.
Those who supported the ruling party takeover of the judiciary wanted to make sure the president wasn’t going to veto the measure again.
Given the pressure from Jaroslaw Kaczynski – probably the most influential and politically powerful Pole today – the president yielding to him seemed to be a likely outcome.
The current ruling party in Poland is Law and Justice, a right-wing populist, conservative, Catholic party. Law and Justice is a remarkable party – despite being neither the prime minister nor the president, the party’s leader is the most powerful man in the country.
That’s Kaczynski, the twin brother of the deceased former of Poland, Lech Kaczynski, who died in a 2010 Smolensk plane crash.
I understand that Jaroslaw Kaczynski may still be mourning the loss of his twin, yet I dare say that he might be in need of some more serious psychiatric help and counseling.

If the real world was a cartoon, he would be a man gone crazy who decides to finish his brother’s masterpiece and take over the world, blaming everything but coincidence for the death of his twin.
Since April 2010, on the 10th day of each month, nationalists gather to mourn Lech Kaczynski, his wife Maria and the others killed in the Smolensk plane crash. They pray and they protest. To some of them, the top two villains – who they say conspired to kill the ex-president – are Donald Tusk and Vladimir Putin. 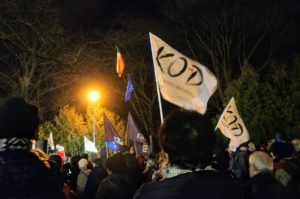 Now, someone here is being paranoid and I don’t think that’s me.
I had almost reached Wiejska 6. The wide pavement beneath the footbridge is fenced off and guarded by dozens of policemen, a number of silver-and-blue Fiat Ducatos parked nearby. No civilians in sight.
“Are you trying to get to the Senate?” I heard a male voice behind me ask. I turned around and saw a City Guard, a member of the municipal police.
I must have looked disorientated, and I was, so I nodded and he kindly pointed the direction and stopped the cars so I could cross the road.

I thanked him and headed towards the sound of the speakers, the shouting, and the whining – the sound of demonstrations.
The president did not veto the legislation, but instead signed it a few days later. Poland will lose its separation of power and the parliament – mostly members of the Law and Justice party – will choose the judges for the Supreme Court.
Citizens get angry when the government introduces unconstitutional laws and abuses its power.
Goodbye, trias politica.
Joanna Koter is a Senior Reporter for Youth Journalism International.