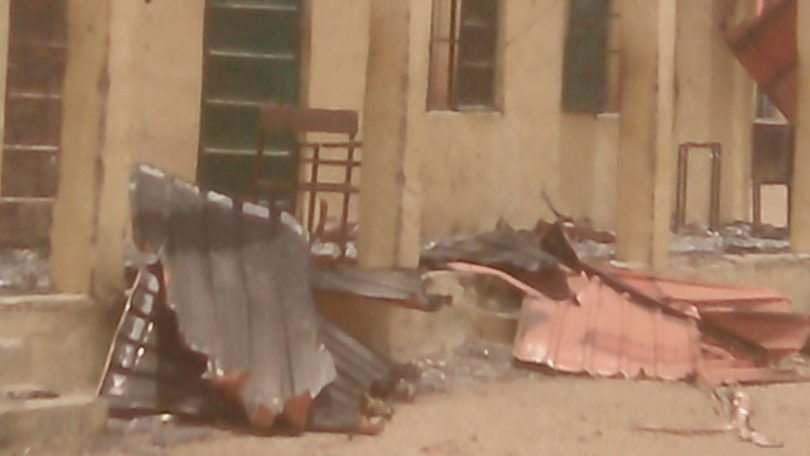 The school in Chibok after the kidnapping of its students. (VOA photo)
IBADAN, Oyo, Nigeria – Nigerians shifted their attention from the recently concluded national election as they remembered the first year anniversary of the more than 200
schoolgirls kidnapped by Boko Haram terrorists.

After a myriad of terrorist attacks in northern Nigeria, Boko Haram – which is striving to create an Islamic state – ignited global outrage as they abducted the girls in the wee hours of April 14 from a public boarding school in Chibok, a town in the northeastern state of Borno.
The schoolgirls were about to conclude their final exam when the Islamist sect made away with 276 students. Of those, 59 girls escaped and 219 are still held captive.
In the outrage that followed the girls’ disappearance, the #bringbackourgirls campaign went viral on social media. It helped create worldwide awareness about the plight of the abducted schoolgirls – more than 6 million tweets have been sent using the hashtag since the girls went missing, the BBC reported.

From Pakistani education activist Malala Yousafzai to U.S. First Lady, Michelle Obama to Oby Ezekwisili, a Nigerian leader in the effort to spotlight the plight of the missing girls, the campaign to raise awareness has gained endorsement from powerful countries, personalities and organizations.
But as time wears on, Twitter activity has dropped sharply and the campaign has dwindled.
Nevertheless, a fresh campaign continued last week as the #Bringbackourgirls group in Nigeria organized a series of events encouraging people to remember the girls ahead of their first anniversary. One event included a procession in Abuja, Nigeria’s capital.
Also, last week, Yousafzai released an open letter calling on Nigerian authorities and the international community not to relent until the schoolgirls are freed.
Although military officers and negotiators from the United States, the United Kingdom, China, Israel and France offered to help Nigeria in finding the girls, analysts said they left few weeks after their arrival due to lack of cooperation from the military and the Nigerian government.
Chibok is essentially a Christian community in the heart of northeastern Nigeria, the epicenter of terrorism since Boko Haram launched its first attack in 2009.
Initially, the schools in the town closed in the month before the kidnapping due to the fear of incessant attacks rocking the region. But the schools reopened so that the girls, who ranged in age from 15 to 18, could finish their final exams.
In one of its damning reports, Amnesty International said that in northeastern Nigeria alone, terrorists, who oppose secular education, have destroyed 50 secondary schools.
This deep-seated position is clearly demonstrated in a video released by Boko Haram last year. Its leader, Abubakar Shekau, said the girls shouldn’t have been in school in the first place, adding that they should have been married since the age of nine.
In another video, Shekau claimed the abducted girls were converted to Islam and auctioned off for $12.50 each into forced “marriage” with members of Boko Haram.
A year and still counting, more than 200 girls are still missing and no clue about their disappearance. For their parents, it has been hell on earth as their wounds are still raw and yet to heal.
Al Jazeera reported that at least 11 parents of the Chibok girls are dead – four of heart failure and seven more killed in a bomb attack in a nearby village of Kautakari last
July.
Nigeria’s outgoing leader, President Goodluck Jonathan has been pelted with criticisms for not doing enough to rescue the girls. The government announced a ceasefire deal in October, but it was nothing but a ruse.
With tension about the girls’ whereabouts still thick in the air, the Nigerian military has also been berated for not doing enough since the girls disappeared.
Early this year, a multinational joint task force comprised of soldiers from Niger, Chad and Cameroon, launched an onslaught on the terrorists, recording massive victories and recapturing many towns under the grip of Boko Haram.
Recently, Nigerian newspapers have reported that United Nations and military officials are speculating that the missing girls may have been murdered by Boko Haram as the terrorists fled the town of Bama.
Nigeria’s incoming president, General Muhammadu Buhari, has promised to vanquish the sect after he takes office at the end of May, but for now, Nigerians continue to mourn.
Festus Iyorah is a Senior Reporter for Youth Journalism International.