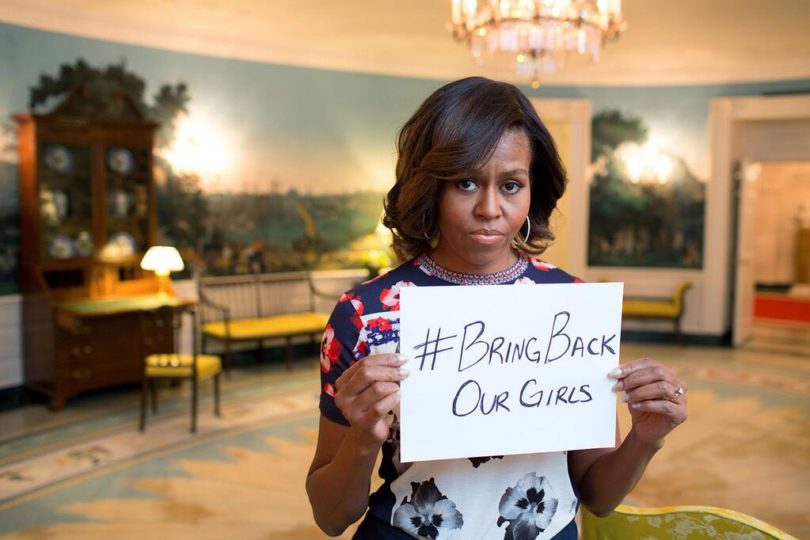 U.S. First Lady Michelle Obama
ABIA, Nigeria – When in 1948 South African author Alan Paton chose to entitle his book Cry, the Beloved Country, it probably did not occur to him that Nigeria would need to do that after over five decades.

Nigeria should cry, wail even, that after 365 days it was not able to deliver more than 200 of its daughters from the tight grips of their abductors.

We have waited too long for their return and, like the child whose mother went to the market, our eyes are fixed on the road expectantly waiting, watching, praying and of course crying that they return in peace.

Who knows what fate might have befallen them in the last 365 days. Have they been killed, sold to slavery, turned into sex objects – just what is their fate?
Indeed, Nigeria need to cry!

To think that we have momentarily forgotten about these girls after just a few months of chanting the “bringbackourgirls” mantra is more disheartening.
We have forgotten so easily that they could have been our sisters, friends, our co-compatriots and in the near future, mothers, doctors, lawyers, engineers and other leaders.
We really need to cry – for the poor state of our security agencies, for the ravages bedeviling northeastern Nigeria, for the brazen killings committed by Boko Haram leader Abubakar Shekau, and for our country because we are becoming insensitive to the plight of the victims.
Who knows what they have been eating? Who knows if they have had their baths and changed their clothes? Are they sheltered or left at the mercies of these terrorists? Who comforts them when they experience horrific menstrual demons – or has that been taken over by pregnancy and motherhood?
Yes, Nigeria has done everything to rescue her daughters except to cry. Perhaps that might soften the abductors’ hearts. Perhaps!
In the northeastern part of Nigeria – where terrorists kidnapped the Chibok girls from their school – where choosing to be educated is adjudged a crime by those same Boko Haram terrorists, then the last resort is perhaps to cry.
Nchetachi Chukwuajah is a Junior Reporter from Nigeria for Youth Journalism International.