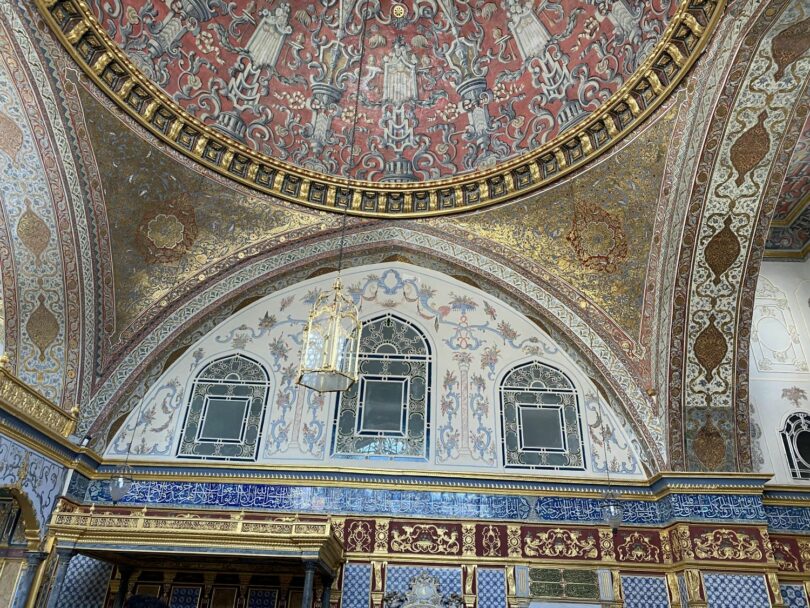 ISTANBUL – Standing outside in the burning Turkish heat and ignorant of where we were going, sweat dripped down our backs as, we entered the UNESCO World Heritage Site known as the Topkapı Palace.

We couldn’t have imagined all the fascinating stories that happened behind those big towers.

It began with the castle-style entrance near the Hagia Sophia with a gigantic Turkish flag flying at the top – an incredible sight.

The surroundings were astonishing by themselves, a sea of giant trees that reached the height of the walls next to the historical surroundings that protected the palace. Even though they were staggering, they turned out to be the least spectacular thing we saw.

Walking in, the first thing we visited was the Harem. Even though most rooms were not open to the public when we visited, the ones that we were able to see were incredibly beautiful.

Ceramic tiles with intricate patterns lined the floor and walls. Big windows illuminated the room with sunlight, and millions of little golden details sparkled from all wooden objects, from furniture to doors.

According to the Topkapi Palace’s official website, the only people allowed inside it were the sultan, his family, and his concubines. At first sight, you wonder how such a small group of people lived in that huge space instead of an entire town.

Even with so many tourists in every single building, as we walked around, it felt as if it wasn’t crowded, as if you could fit more people in that space that once belonged to so few.

One of the most notable parts were the hamams, also known as Turkish baths. They were grandiose white rooms, with golden sinks and openings in the roof that allowed the natural light to enter. The place was too beautiful to even imagine that it used to be a bath instead of a piece of art.

Most of the precious objects that once belonged to the sultan weren’t even kept inside the palace.

The Imperial Treasury – just a few feet away from the palace – stored relics from the warriors of the time, including the Topkapi Emerald Dagger. Lining the Treasury walls were thousands of knives, swords, bows, arms, precious jewels, and all sorts of different weapons.

Before arriving in Türkiye, we read every article of “10 things to do in Istanbul,” and every single one included Topkapi Palace, but we hadn’t reflected on the historical importance it had on Turkish culture and its roots.

You cannot appreciate Topkapi Palace fully without walking through the rooms, marveling at the architecture and listening to the locals speak about its history.

Ana Fadul is a Correspondent with Youth Journalism International from Colombia. She co-wrote this article and took some of the photos.

Regina López is a Senior Correspondent with Youth Journalism International from Mexico. She co-wrote this article with Fadul.