BRISTOL, Connecticut, U.S.A. — Republican mayoral candidate Mike Werner says the city needs to do more for teens, including construction of a youth center, expanding the library and improving the schools.

“We should be talking to kids more, ” said Werner, “and see what they’re interested in. I’ve talked to kids that think there should be a BMX track in Bristol and a youth center. Some of these things, the taxpayers can afford them, and it keeps kids out of trouble. It gives them something to do that’s constructive.”

Werner, a former mayor, said a youth center, a project much talked about in Bristol over the last few years, is something he could really get behind. 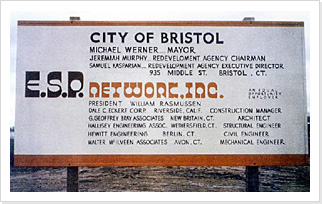 When ESPN first came to Bristol, Mike Werner was the city’s mayor — and a champion of the project. (ESPN)

Despite the existence of good athletic and musical programs in the city, said Werner, there just aren’t enough outlets for teens in the city. He suggests that teens should perhaps become more involved in city issues, more politically active.

“There’s a good group called the Youth Chamber of Commerce,” said Werner, “and they do some good things. There should be more groups like that, maybe even Young Republican and Young Democrat organizations like there used to be when I was a kid. It might be good for kids to see how a campaign works, and how the city really works, you know?”

Werner has been largely out of the public eye politically for a number of years. It was his growing frustration with the city’s direction, he said, that called him back into action.

“I was mayor of Bristol,” said Werner, ” but I left the position in the eighties. When I left for work my kids were still in bed. They hadn’t woken up yet. And then, when I came home, they were in bed again, sleeping. I really felt my family needed me more than the city.”

According to Werner, he took a job as director of the Greater Bristol Chamber of Commerce after serving as mayor and also remained active in the community, including volunteer work with the American Red Cross and the United Way.

“I watched for a few years,” Werner said, “and was really dissatisfied with the way the city was being run. I didn’t see anyone else on the horizon looking to change the way things were headed, so I said ‘Hey, I’ll run!’ and here I am.”

What disturbs him most about the city’s direction, said Werner, is what he called the reactive attitude of Mayor Frank Nicastro and his administration.

“Frank seems to wait until he gets a call from someone or until he reads about it in the paper,” said Werner, “and you have to be more proactive than that. It’s all about planning. I see very little long term planning going on — and you need that.”

According to Werner, his record on long-term planning speaks for itself.

“When I came into office the pension funds were really underfunded,” he said. “We brought in a financial consultant they’re still using today, saving the city millions. We created Technology Park with the Radisson and Otis Elevator, and I brought ESPN to Bristol. We were taking a long-term approach.”

It’s that sort of long-term planning, according to Werner, that should concern Bristol’s youth.

While Werner acknowledges that the most prevalent question among teens is “what is there to do?” he said he thinks the question “what are we capable of doing?” is just as valid.

Beyond the obvious question of teen boredom, Werner said the city’s basic facilities, from libraries to classrooms, are inadequate.

“We’re way behind in our classrooms as far as computers go,” said Werner. “We need to be moving much faster in improving them than we are, because our kids are going to go into the job market and even to college, without knowing some basic programs and things, because they never had them in school. You should also be able to research at the public libraries, but student who tries knows that the facilities are really inadequate for a city our size.”

Like Nicastro, Werner said he sees Bristol as a great town — but a town that can be improved upon. Planning proactively and encompassing the city’s many problems under one plan for improvement is essential, Werner said.

“There are lots of things to do,” said Werner, “and you can’t do it in bits and pieces. It’s a lot of different things that interconnect into a big thing — and you have to be willing to see it that way, and to plan for the future. That’s what it’s all about.”